Malcolm Gladwell meets Ben Fountain: ‘So much of politics is absurd and dumb’ | Books 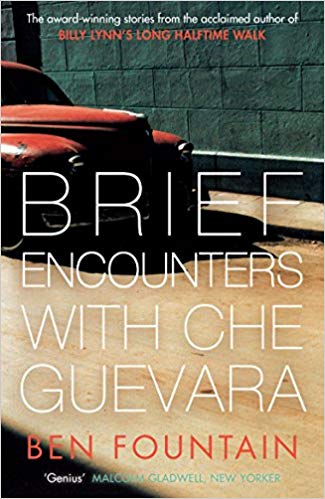 Ben Fountain’s 2016 election year essays for the Guardian have been expanded into a new book which tries to make sense of what happened and where America stands today. Malcolm Gladwell, author of The Tipping Point and Outliers, first wrote about Fountain in an article for the New Yorker titled Late Bloomers in which he called Fountain a genius. They sat down this week in Brooklyn, New York, to talk Donald Trump, Hillary Clinton and the American psyche.

Malcolm Gladwell Ben, you have written this extraordinary book, Beautiful Country Burn Again. Why don’t you start just by explaining the title.

Ben Fountain Beautiful Country Burn Again. I came across those words in Joan Didion’s South and West book, which is essentially a notebook of hers on notes about the south and west of the United States. It was a reference to the current spate of wildfires going on in California at the time, I think.

Then someone pointed out to me that those lines were actually from a California poet named Robinson Jeffers, and it’s a poem called Apology for Bad Dreams. There are these wonderful lines in there: “Beautiful country burn again. Point Pinos down to the Sur rivers. Burn again with bitter wonders. Land and ocean and the Carmel water.”

Those are haunting lines.

MG The great project of the book is to situate the Trump phenomenon very clearly in the mainstream of American history. You paint it as the quintessential American story. It’s almost like we should not be surprised at what happened.

BF Right. Not be surprised, but I think it takes some thought and some reading and some analysis to reach that conclusion. When you’re living in the moment with little or no background, you do think: “Where did this come from? We seem to be in uncharted waters.”

And so, if you’re a person like me, who is bookish, and has the opportunity and things come together that allow me to take a deep dive into all this, well, I did my deep dive and this is what I came up with.

BF I enjoy seeing the humor in things … I think it’s a valid way to look at politics, I mean, so much of it is absurd and dumb and just so nakedly careerist and self-aggrandizing, that you just have to laugh at these people sometimes.

MG There’s a wonderful description early in the book of a Trump speech, which is as fine a piece of writing as I have read in a very, very, very long time. But I felt you have, on some level, an affection. He’s such an extraordinary character. Is that unfair of me to say that?

BF He has a genuine raw power. He has a very powerful personality, and when you are in a gymnasium with him, you feel it. He is a master of the psyche and he’s a master at connecting with people and he makes you feel very special. I mean, in that gymnasium in Iowa in January, I was trying to think, what speaker have I ever seen who could forge such a visceral connection with so many people in so short a time? And you could just feel it in the air. So, when the event was over, people were happy, they were smiling. That’s a sure sign it’s been a great success. They didn’t just wander off, like, “OK, now it’s time for dinner”. It was like they had been through something.

MG But you’re subtly evading my question, which is am I wrong in reading a little bit of … You take a certain delight in him.

BF Well, yes, I do. A morbid delight. You have to acknowledge the showmanship and the raw talent and the effectiveness of what he’s doing. And I was watching to see my own reaction, like, would I be taken by him on some level? I was half expecting to, and I walked out of there really depressed, really sad. I just felt bad. Everybody else felt great.

MG You make your politics leanings obvious. Did the process of doing this editing, of doing this reporting increase or decrease your affection for Hillary [Clinton]?

BF Both, I guess. I will say, and this is true of almost all the politicians I came across, when I was in their presence – it’s weird – I felt a strange tenderness for them, because in some ways they seemed very vulnerable. And they are flesh and blood and they’re putting themselves out there to do this thing that might well destroy them. I felt that way with Hillary Clinton. I did not feel that way with Ted Cruz. I just, I have a very low opinion of him, and we can leave it at that.

MG Did your own politics evolve over the course of doing this book?

BF Yeah. Became more radical. Farther left. I feel like the working and middle classes of this country have gotten the shaft over the last 35 or 40 years, and part and parcel of that has been a very effective sales job on the mind of America, this hard sell of free-market fundamentalism. It has benefited a few people at the top and there’s been scant trickle-down. It made me angrier.

Also, the center in American political life has shifted so far to the right. Just me standing still, I felt like I was moving farther and farther to the left. I mean, Eisenhower Republicanism is basically Democratic socialism. I mean, he expanded social security, he inaugurated the interstate highway system, he was very much in favor of collective bargaining and he pushed back against the military-industrial complex. I mean, those are all things we would associate more with somebody like Bernie Sanders these days.

So, I think I just recognized the center has shifted so far in American politics, and left me standing there as a hardcore leftie.

Our humanity is just as important as anyone else’s, and there are powerful forces working against that.

MG Last question. Do you have any ambitions for the book? What do you hope it does?

BF It’s hard to change people’s minds with information and rational arguments. I think what really changes people are experiences.

I hope that people who are looking for answers, I hope they could turn to this book and feel like this is an honest attempt to try to find, one writer trying to find his way towards some answers. Even if he doesn’t have the answers, perhaps his writing is a useful thing to think with and keep in mind, as this reader is processing his or her own experience.

In terms of bringing fiction techniques to non-fiction, art, when it’s really working is the right piece of art, the right person at the right time. It’s more in the nature of an experience than information. I mean, works of art do change people. They can be so powerful and profound.

So, perhaps, I do have a hope that for some people there will be elements of an experience in there, and maybe that will help them get more understanding.

This interview was edited for length and clarity