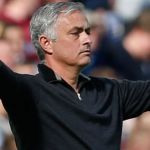 Manchester United have dismissed reports Jose Mourinho will be sacked this weekend regardless of Saturday’s result against Newcastle.

Reports emerged on Friday night that a decision had already been taken to remove Mourinho but Sky Sports News has been told no such decision has been made by the powers-that-be at Old Trafford.

Mourinho is a without a win in four matches heading into Saturday’s visit of Newcastle, something which has never happened before in his managerial career.

Last weekend’s 3-1 loss at the London Stadium was United’s third league defeat of the season. They sit 10th in the table having made their worst start to a league campaign in 29 years and were booed off the pitch after the goalless draw with Valencia in midweek.

Mourinho looked particularly unhappy during his pre-match news conference on Friday morning where he conceded there are “many different reasons” why United are struggling this season.

A number of United players have been publicly criticised by the manager in recent months including club captain Antonio Valencia, Luke Shaw, Anthony Martial and Eric Bailly.

Mourinho replaced Louis van Gaal as Manchester United manager in 2016 and has won the EFL Cup and Europa League.