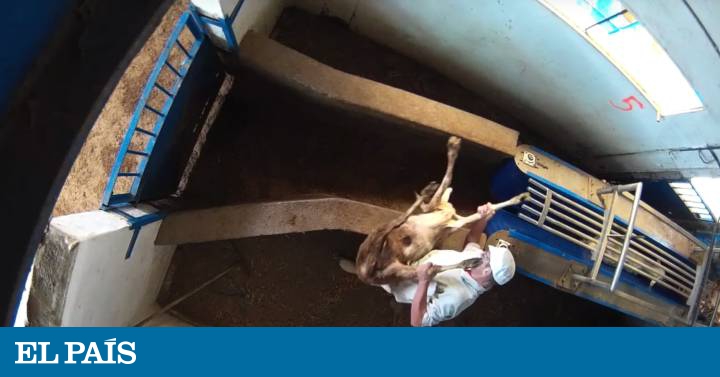 The images are compelling: lambs being thrown around, kicked and beaten; a worker repeatedly jumping on top of them. Some of the animals are unable to stand, yet pass through to the production chain, ready for consumption.

According to images shared with this newspaper by the environmental association Equalia, these scenes are taking place inside Cárnicas Salvanés SL, a slaughterhouse located in Villarejo de Salvanés, in the southeast of the Madrid region.

On Monday, Equalia filed a criminal complaint against this business at a court in Leganés, accusing its owners of violating European animal welfare law and finding inadequate sanitary conditions at the facilities. The company denies the accusations.

The footage begins with a drone-captured image that shows the location of the slaughterhouse in Villarejo de Salvanés, This is a family business run by three brothers, where lambs, sheep, goats and cows are slaughtered and subsequently consumed in Madrid and parts of Toledo.

The company held the Halal certificate until the beginning of 2019. This means that, within the same slaughterhouse, the animals are separated and depending on the customer, they are either stunned or not (when the Islamic tradition is followed). Throughout this year, all animals should have been stunned to avoid unnecessary suffering.

But inside, hidden cameras captured what happened between last June and early September. The images show that some animals are not stunned before being killed. In the video, a sheep is seen suffering an entire night without being slaughtered.

“The slaughterman shirks his duties, so that some lambs pass through production without their blood being properly drained and are hung up while still alive with the rest of the dead animals. One of them was hung while conscious for up to half an hour, at which point the image of the animal is lost. We don’t know if it was skinned alive,” explains David Herrero, general coordinator of Equalia, which has launched similar campaigns against slaughterhouses in Segovia and Ávila.

The images show sheep that are ill or cannot stand on their legs, being taken to the conveyor belt to enter the bleeding area. One of them had been suffering for an entire night, the footage shows. “It was 10 hours before it was taken to the slaughter zone,” says Herrero. The law states that an animal that cannot walk will not be transported to the place of slaughter, and will be instead slaughtered on the spot, without moving it or, evidently, throwing it.

Other images show a worker attaching identity tags to several lambs inside the slaughterhouse. The regulations specify that all animals must already have this identification by the time they enter the enclosure, otherwise there is a risk of losing traceability.

“That is impossible. It can’t be. There are official veterinarians here. When animals enter the slaughterhouse, they have to come with their paperwork in order. If any are missing, they are processed through the ministry of Agriculture. And if any animal is not identified, it is discarded. Yesterday [Monday] there were two animals that didn’t have an ear tag and they were thrown away [sic].” explains Julián Rangel, manager of Cárnicas Salvanés. “It all depends on the context. A few isolated images can be interpreted any way you like,” he added, denying that his company fails to  comply with animal welfare regulations or that sanitation conditions are deficient.

It all depends on the context. A few isolated images can be interpreted any way you like

In addition to exposing violations, Equalia is conducting a  campaign for “a progressive implementation of CCTV in slaughterhouses” in order to aid the proper enforcement of animal welfare and food safety regulations. “We ask for them to be installed wherever live animals are handled, and for the images to be stored for one month in strict compliance with data protection legislation. Also, we ask that these images be reviewed by the same operator or by the food safety service of the Madrid regional government.” This system, Herrero assures, is already implemented in places such as England, Scotland and Israel.

Beyond the installation of closed-circuit cameras, “what is evident is that the legislation needs to be tightened,” says Laura Duarte, the new president of the animal rights party Pacma. Duarte notes that thanks to the work of associations like Equalia, it is at least possible to “prove that all of this is really happening.”

“Stunning requires a minimum amount of time, but because the production chain goes so fast, most of the time the animals are fully conscious. The truth is that even the little legislation that does exist is not being complied with,” she explains.

Madrid regional officials hold that the compulsory installation of CCTV is a measure that must be taken “at the national level.”

“The slaughterhouses in the Madrid region are under the control of the Official Veterinarians of the General Directorate of Public Health; there are daily inspections of the slaughtered animals, of the sanitary conditions at the facilities, and of the slaughtering process,” explains a source at the Madrid Department of Health.

In addition to the daily inspections, audits are also carried out to check the working procedures by slaughterhouse operators, who “must have a self-monitoring system in place based on hazard analysis and critical control points, including hygiene and animal welfare aspects.” In Cárnicas Salnanés, that audit was carried out in August.