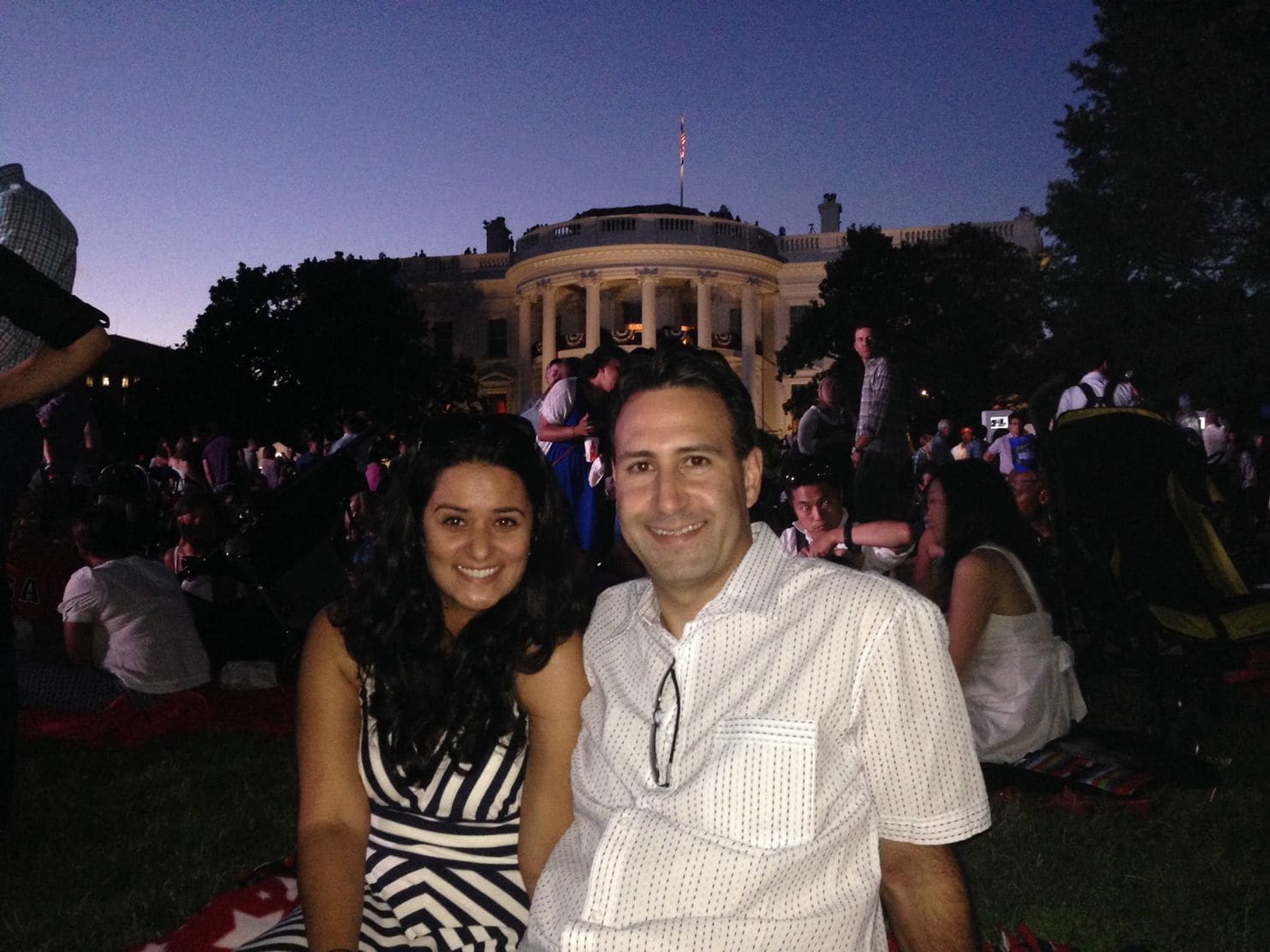 Michael Robertson and his wife, Sahar Wali, on the White House lawn. (Courtesy of Sahar Wali) The entry, on the White House’s blog, began with a startlingly personal disclosure.

Michael Robertson, then a deputy cabinet secretary in the Obama White House, wrote of receiving a diagnosis for stage IV cancer just two months after he proposed to the woman who would become his wife. He was 35 years old.

“A checkup with my family doctor only days before spawned a whirlwind of appointments, scans, and tests,” Robertson wrote in the 2013 entry. “I learned that I was now a stage IV, metastatic colorectal cancer patient. A cancer that usually afflicts those 65 and older wasn’t just inside my body, it was growing and making its way through my body, spreading from my colon to a tumor in my liver and another one in my lungs.”

The essay came as debates about the Affordable Care Act continued to occupy Congress, years after the law had been passed. Robertson had made the decision to disclose the illness publicly after a new round of attacks on the law had been unleashed after the disastrous rollout of the HealthCare.gov portal.

He wanted to tell people how his treatment had only been possible because of his health insurance, how the lack of insurance dramatically increased mortality rates for cancer patients like him, how the law’s exclusion on treating preexisting conditions like his differently was crucial. And the personal plea gained attention, leading to profiles by McClatchy and the Los Angeles Times, which called him a symbol of the White House’s determination to carry out its signature law.

On Wednesday, Robertson’s former White House colleagues shared the tragic news that he had died the night before, at the age of 41. The cancer had returned. Many of them took to social media to mourn, including former president Barack Obama, who wrote a stirring tribute to his former aide.

“What we remember today is the way he lived his extraordinary life,” Obama wrote on Facebook. “A life of meaning, purpose, and service. A life lived to make this country better for all of us.”

“He was a great American whose light and brilliance filled every room he entered,” researcher Phillip Carter wrote on Twitter. “We will all miss him.”

A native of Fresno, Calif., Robertson had worked for Obama for more than 12 years, his wife, Sahar Wali, told The Washington Post.

Robertson had originally set his sights on working for the then-Senate candidate from Illinois at the end of his time in law school in San Francisco, telling McClatchy that he contacted the campaign after Obama won the state’s Democratic primary in March 2004.

“I started following him, monitoring him,” Robertson said. “I did a lot of research.”

Robertson moved to Chicago after he graduated from law school to volunteer full time for the candidate, who was then a mostly unknown figure in the world of national politics.

Obama said that Robertson was “an outsized presence” on his small staff at the time.

“He was driven and dedicated, a constant source of wisdom and kindness, someone who jumped into public service because he believed his efforts could help change this country for the better,” Obama wrote.

After Obama won the Senate seat, Robertson was hired to his staff, and he worked his way to the position of deputy to the chief counsel. He later worked for Obama’s presidential campaign, transition team and later chief of staff of the General Services Administration.

Along the way, Robertson earned a master’s degree from Georgetown University Law Center. He learned about the political hot seat, facing tough congressional questions about GSA spending. As Obama started his second term, Robertson moved up to deputy Cabinet secretary.

But on vacation near Santa Cruz in 2012, Robertson noticed he wasn’t feeling well. A checkup with his family doctor led to a battery of appointments, scans and tests. When a doctor told him he had stage IV cancer, Robertson asked him what was the next stage.

“There’s only four,” the doctor told him.

“I was otherwise healthy my whole life — 35 years old, an athlete into college, professionally doing important work I’d only dreamed of, and finally about to be married and start my own family,” Robertson wrote for the White House. “Fighting to survive a catastrophic disease was NOT part of my plans.”

He and Wali were married the next year. He found out that he had a job offer from the White House while he was recovering from surgery at Georgetown University Hospital, according to the Los Angeles Times.

He started a new round of chemotherapy three weeks into the job, leaving to go to the hospital every other Thursday, the Times reported.

“Just thinking of the word ‘Thursday’ made him gag,” the Times reported. “The nausea grew worse. He dropped 15 pounds, beyond the 35 he’d already lost. He normally weighed close to 190. The chemo straightened the wave in his black hair.”

The newspaper highlighted Robertson’s commitment to his work, documenting a meeting in which he met with top officials from various federal agencies working to implement the Affordable Care Act while receiving nausea-inducing chemotherapy drugs. As the Times wrote:

Michael Robertson put the bag of chemicals in an inside pocket of his sport coat, the pump in the other. He snaked the tubes between the buttons of his shirt to the port in his chest. He adjusted his tie to cover them … A soft “bzzt” every 90 seconds alerted him to another dose and another wave of nausea. He timed the cadence of his questions and comments to the ebb and flow of the chemo.

No one seemed to notice, and that’s how he wanted it.

After Robertson finished that round of chemotherapy, the Obama administration unveiled HealthCare.gov, the portal for people around the country to buy health insurance online. But the site’s unveiling was plagued by problems, giving opponents of the law more opportunities to critique it.

[HHS failed to heed many warnings that HealthCare.gov was in trouble]

Wali, his wife, told The Post that Robertson had sat down to write the essay that would become the White House entry after seeing Sen. Ted Cruz (R-Tex.) disparaging the law on television.

“He realized that that was what people were hearing,” she said. “They weren’t hearing from the people who couldn’t imagine that something catastrophic could happen to them but whose lives could be saved through health care. And he was one of those people.”

Robertson explained it this way to the Times: “It was personal against me now, and against all those people I met and saw throughout.”

The couple talked over the risks of disclosing Robertson’s personal medical information in such a public forum, but he would not be dissuaded.

“He said if even one person gets health care because of it, then it’s worth everything I’d risk,” Wali said.

After the publication of the essay, Robertson and his wife were flooded with positive responses from friends and strangers alike. Obama tweeted the entry, bringing it to an even wider audience.

The essay serves as a passionate testament to the importance of health insurance and Robertson’s deep belief in Obamacare.

“People diagnosed with cancer have a 70 percent greater chance of being alive five years after they are diagnosed if they have health insurance at the time of diagnosis,” Robertson wrote.

He noted that he had only paid about 1 percent of the exorbitant costs of his care, because of his insurance.

“Without that, I would have bankrupted my family just to stay alive,” he wrote. “And with the limitations on preexisting conditions and lifetime caps that existed before Obamacare, there’s no telling what life would have been like for us moving forward . . . Access to affordable health insurance should not depend on luck or economic status; it should be available to everyone.”

Wali told The Post that Robertson had been invested in health insurance as a public-policy issue since well before he was diagnosed with cancer. The passage of Obamacare was one of his proudest achievements.

“He always said one of the greatest joys of his life was the ability to work in whatever small way that he could to ensure that millions of people could have access to health care,” Sahar said. “You shouldn’t have to fight to be able to fight it, he always said that.”

The Times reported that even during his busy job at the White House, Robertson would often spend his nights on phone banks, contacting people to get the uninsured to sign up for policies.

“I had health insurance when I needed it,” he said. “If I can help one other person have what I have, I want to try.”

After his time in the White House, Robertson went to work in the private sector. He was a partner at and founder of Veretus Group, an intelligence firm.

In addition to Sahar and their 16-month-old son, Wali, Robertson is survived by his parents, Karyn and John Robertson, and sister Jamiee Robertson. Friends have set up a GoFundMe page to raise money for Wali’s college tuition. It has currently raised more than $40,000.

The family moved to Texas, where Robertson’s wife is from, this year so Robertson could receive treatment at the MD Anderson Cancer Center, Sahar said.

He made another powerful statement with what was one of the last acts of his life, his wife said: he completed, signed and sealed a mail-in Texas ballot from the hospital to vote.

A magazine editor suggested a series on ‘killing vegans, one by one.’ Now he’s out of a job.

William proposed. Sandra said no. They reunited on the Supreme Court.