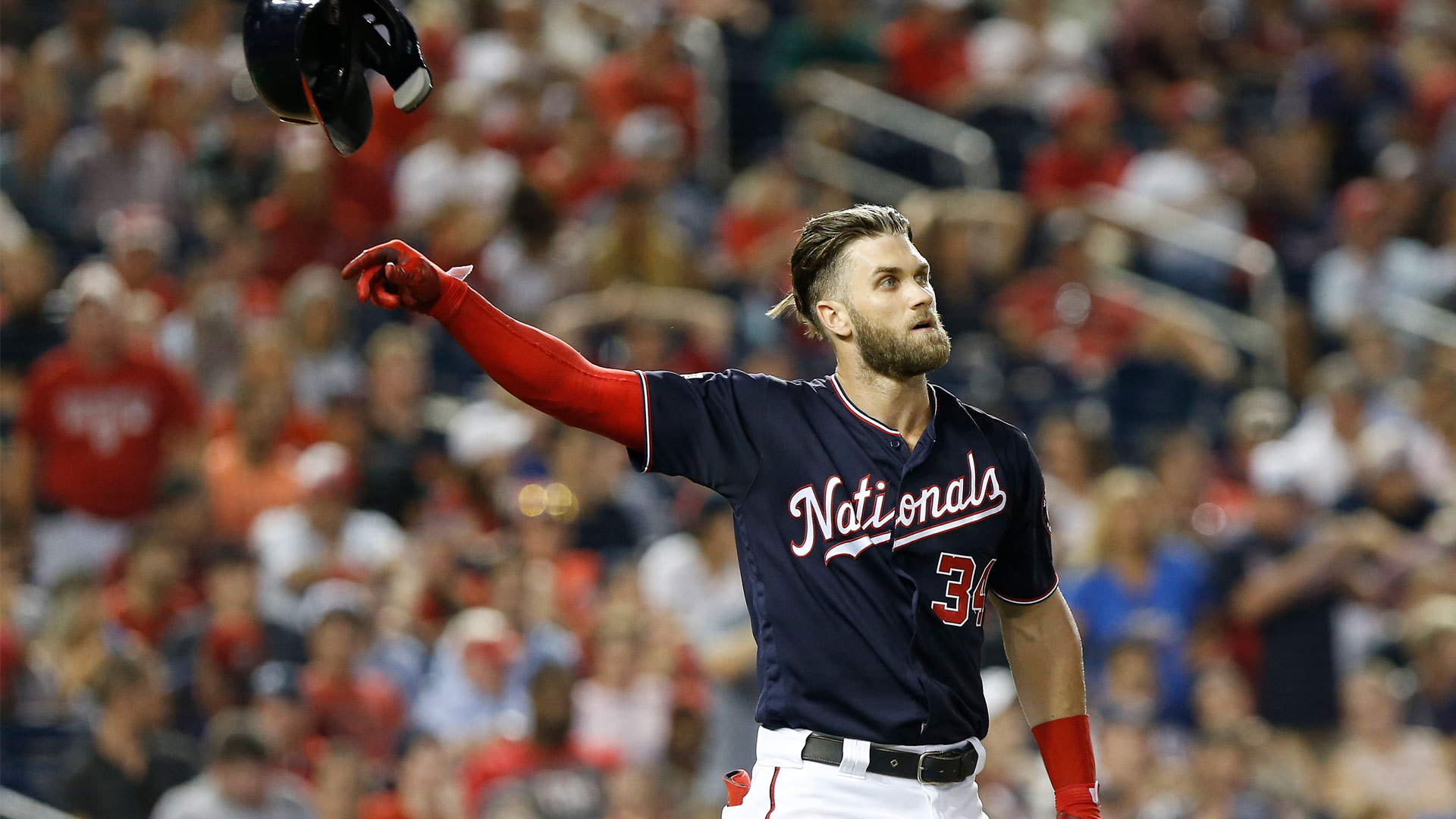 Editor’s note: “As Told To Amy G” will feature exclusive conversations with Giants staff and players, as well as interesting figures around Major League Baseball, throughout the 2019 season. First in the series: Giants president of baseball operations Farhan Zaidi.

Eh, forget the clichés. How about “torture”? Now that’s a word familiar to Giants fans.

It most aptly describes the offseason leading up to San Francisco’s 2019 Opening Day.

The normally sizzling Hot Stove has been somewhat at a low simmer for the Giants, with just a handful of lesser-known pick-ups amid the recent Bryce Harper rumors. The most interesting addition to the Giants’ organization has been in its front office, as Farhan Zaidi will work his magic out of 24 Willie Mays Plaza as president of baseball operations.

I had a chance to sit down with Zaidi at the MLB Winter Meetings in December to get a vibe on the “New Guy,” or, better yet, “The Man,” who’s now charged with the daunting task of a major rebuild and return to greatness.

I wanted to know many things about the Giants’ new architect, but mostly “WHY” — why would he leave the Dodgers, who have a seemingly unlimited payroll, won the NL West every year in his four as general manager, averaged 95 wins per season and went to the last two World Series?

And so, that’s where we began …

“Yeah, you know, great question. I was fortunate to be part of an organization that had some success down in L.A. and a really good group of people that was tough to leave. But my wife and I have ties to the Bay Area. Went to school at Cal, worked for the A’s for 10 years.

“When we heard this was even a possibility, we got pretty excited about it. It’s a different kind of baseball situation where we are. But I kind of view it as a fun and exciting challenge. Our group is really energized.”

I’ve always been partial to baseball wives. Personally, I believe they never receive the credit they deserve. Talk about holding down the fort.

Baseball wives endure long nights, marathon seasons, and many, MANY moves on their own with children in tow. It’s no walk in the park — pardon the pun — and as a self-proclaimed feminist, I believe baseball wives are some of the most fierce and strong women I’ve had the pleasure of encountering. So when Farhan mentioned his wife, Lucy, I jumped at the chance to ask more about her.

“Yeah, it’s funny, she definitely has thoughts and definitely watches the games. She’ll often wait for me to ask her thoughts. She’s an architect by trade and does a lot of interior stuff as well, so she came out and checked out the office in San Francisco a couple weeks ago and has some ideas for new furniture. She brought blue tape, she kind of marked tape all over the floor, all over the desk. And I had meetings in there all last week with just blue tape marked up everywhere.

“I had to explain to everybody that my wife — the boss — had come in and told me not to remove a single piece of tape. It’s a very makeshift feel in that office right now, but I know better than to mess with her work.”

If you’ve studied up on Zaidi, you know he has an extremely interesting upbringing. Of Pakistani decent, Farhan was born in Canada and raised for a large part of his childhood in the Philippines. Baseball wasn’t the obvious game of choice in either country.

So, how did America’s pastime become Zaidi’s passion?

“My family is from Pakistan, so we’d go to Pakistan for summer vacations, and I had a bunch of cousins who all played cricket, and you kind of hold the bat like this, but we’d all hold the bat like this because we were baseball players. It was one of those things that shifted from generation to generation, going from cricket to baseball.”

Like all of us, Zaidi had a favorite baseball player. The difference between him and us? He became that player’s boss.

“Funny enough, my favorite player growing up was Don Mattingly because I was a left-handed hitter and a first baseman, and I didn’t quite have the talent that Don Mattingly had. But my first year in Los Angeles, he was the manager of the team. I told him when I met him, ‘I had your poster up on my wall, and it’s a huge thrill to meet you,’ and he’s a terrific human being, and he did a great job for us as manager, but it was a bit interesting being the GM of a team whose field manager was your hero growing up.

“He’s such a gracious person [that] he made that easy. It was a pretty fun idol to have, for sure.”

Diversity, or the lack thereof, in baseball is an ongoing concern. Zaidi is one of just two Muslim baseball executives, along with Texas Rangers assistant GM Shiraz Rehman. So, I asked Zaidi for his thoughts on how far the game has come and where it still needs to go regarding diversity.

“I think it’s critically important. As much as I regret to say it, there’s so many times I’ll be in a meeting, a baseball meeting, and think how can there not be a woman in this group that’s part of this decision-making process? Where’s the diversity in this room, and why don’t we have more of it?

“To the extent that … I’m an example of this diversity, I very much appreciate that. But I view myself more as somebody who wants to bring more diversity into the game and into itself. As we build out our front office, it’s going to be a real priority of mine. And to your point, I think a city like San Francisco and a region like the Bay Area that prides itself on inclusiveness, I hope we are able to build a baseball front office that’s reflective of the area’s values.”

Then, it was time to get down to the nitty gritty. The “Moneyball” background, the stats, the numbers, the percentages — how was Zaidi’s trendy, brainy approach to the game going to mesh with the Giants’ vintage ways?

“There’s definitely been an information revolution in baseball, and we’ve seen it in PITCHf/x when it first came on a decade ago, we’ve seen it now with Statcast two or three years ago, and the reality is that baseball is a billion-dollar industry now.

“Like all big businesses, people are trying to use every piece of information or data to their advantage. That’s our job, to make sure we don’t leave any stone unturned in terms of what will help us make the best baseball decisions. In saying that, too often this debate is pitted as analytics versus scout, or that sort of thing.

“In contrast to that, two of my first hires here are people that are going to be directing scouting departments, as Zack Minasian, our pro scouting director, and Michael Holmes, we brought over from the A’s as our amateur scouting director. Scouting is still very much part of the fabric of the game. … The ability to identify talent just by watching the game, overlaying stats and data on it, and using the two in conjunction is how I think we can do our jobs the best.”

So that’s good news, right? It isn’t going to be a complete “out with the old, in with the new” thing for the Giants. Zaidi clearly appreciates the foundation of the game while bringing a fresh and current approach.

But what are the fans going to think? Only one thing really matters to them — WINNING.

I wanted to know how Zaidi would handle an extremely passionate fan base that, after relishing in three World Series championships in just five years, has raised its expectations to a possibly unrealistic level. Long gone are the 52 years of waiting for a title, and after two dismal seasons, their patience is wearing very thin.

So, how will Zaidi handle the extreme pressure of pleasing the fan base?

“Stress in itself is not that productive. I like to spend my time thinking about how we can make this team better, this organization better, and really take it kind of one step and one move and one day at a time. One way I like to think about any job is to take the job seriously but not to take yourself too seriously.

“I know how passionate these fans are. I’ve heard words of encouragement from them, and I’ve heard less-than-encouraging words from them also. And that just comes with the territory. All we can do is put pride in your work and put a lot of effort into putting the best product out there. …

“We are at a little bit of a crossroads organizationally, where we want to continue to be competitive — we have the core of a championship team still in place. We’ve dealt with some injuries, we have some challenges on the roster, and we have to start thinking not just about next season but two seasons and three seasons down the road, so it is going to be a balancing act for us to make sure that we are continuing to field a competitive product that fans are excited about, that can compete for the NL West division but also being mindful of the future.

“Can you have your cake and eat it, too? That’s going to be the challenge for us. Really think through the roster, think through ways that we can get younger and better at the same time. And it’s a huge challenge, but we’re going to have fun trying to do it.”

I saved the most important question for last. Let’s be real here: Zaidi was a Dodger for four seasons. He has a lot of ’splainin’ to do (and not just to Lucy) about the amount of blue that’s built up in his wardrobe. He’s now in orange and black territory, so Giants fans wanted to know how he planned to discard of that wretched color.

“That’s a really good question. I certainly can’t [wear it]. I’ve had a lot of friends reach out to me asking that question, and I say I have way bigger problems than worrying about your wardrobe. … I can’t imagine any of that stuff will make its way up to San Francisco with us. We have plenty of Dodger friends and fans down there [in L.A.] so we’ll make them all very happy. But we’ll leave it all behind when we make the move up, I’m sure.”

Follow Amy G on Twitter @AmyGGiants, on Instagram @amyg, on Facebook, and, of course, watch her on NBC Sports Bay Area’s Giants coverage all season. Send her a question any time with the hashtag #askamyg