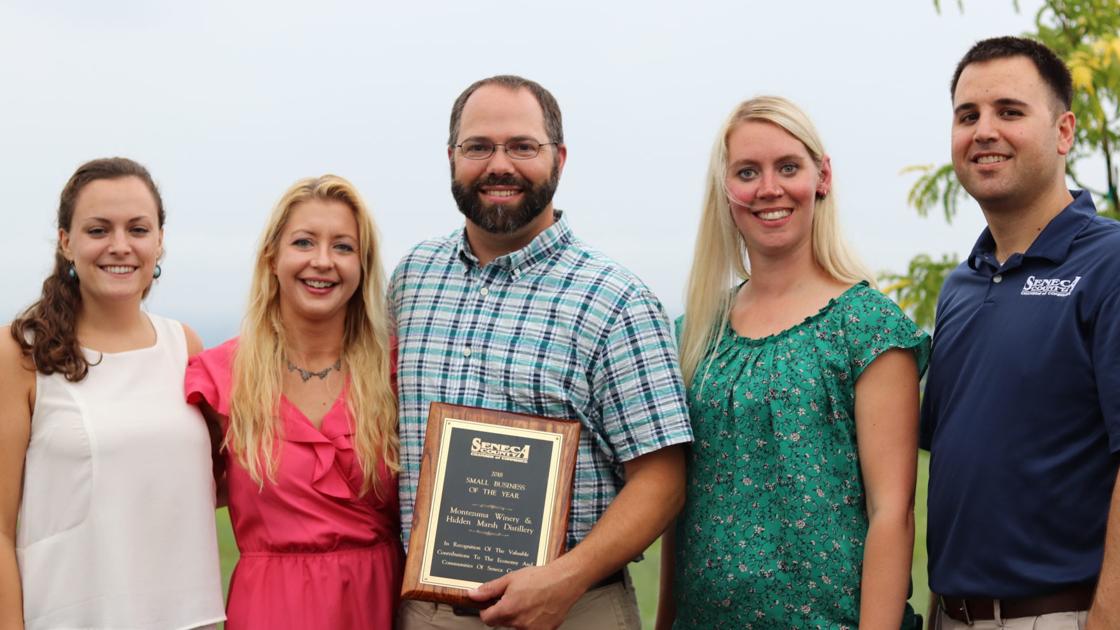 Montezuma Winery was recently named the Small Business of the Year by the Seneca County Chamber of Commerce and Sessler Cos., according to a press release from the chamber.

The chamber presented the Seneca Falls-based winery with its 2018 Small Business of the Year Award at its Annual Membership BBQ event event held at Zugibe Vineyards.

“We congratulate Montezuma Winery on their well-deserved recognition as the chamber’s 2018 Small Business of the Year,” said chamber President Jeff Shipley in the press rleease. “Their extraordinary contributions have positively impacted both our local economy and its food and beverage industry.”

Owned by the Martin Family, the business opened in 2001 following the success of the Martin Family’s Honey Farm and Meadery, which specialized in honey wines, before expanding into fruit wines. Since then, with the guidance of Bill Martin, the winery has expanded into new areas with award winning niche flavors like blueberry, rhubarb and cranberry in addition to traditional grape wines, according to the press release.

In the two decades since opening, Montzeuma winery has experienced significant growth, including expanding into a 14,000 square foot production and retail building, a satellite store in Old Forge, and the Idol Ridge Winery in Lodi, which has its own distillery brand, Alder Creek.

In the last year, the Martin’s also purchased Kings GardenVineyards in Lodi and Max’s Custard in Seneca Falls. While the vineyard was renamed to Fossenvue Winery and given a brand new wine list, Max’s Custard still offers the same food and ice cream but with branding featuring mascot Maxine the cow.

The business continues to remain family orientated after nearly two decades of success. Owners George and Virginia Martin along with sons Ed and Bill can be found working daily at the Seneca Falls location alongside dedicated employees, including Ed’s two children Michaela and Zachery.

“It is truly an honor to receive this great award. We are proud to be a part of the community and are flattered to be recognized as a driving force in the area.” states co-owner Bill Martin “When we started in the wine business in 1999 we never would have dreamed that we would see such significant growth. One of the reasons for our success is our staff of dedicated professionals. Whether they are making award winning wine or providing five-star service they are what puts everything together”.