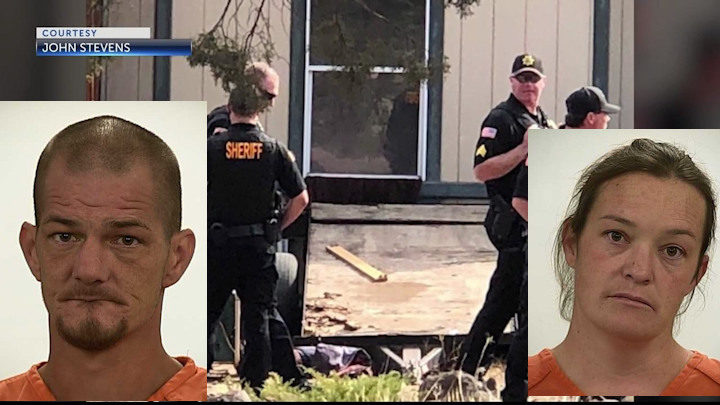 The younger brother of a Crooked River Ranch man arrested Wednesday in a raid where Jefferson County sheriff’s deputies seized 36 animals was arrested the following day on drug and other charges, officials said Friday.

Heckathorn said the raid Wednesday turned up butane hash oil (BHO, or Butane Honey Oil) operation, along with a gun, a large number of marijuana plants and items used to crate hash oil through the use of butane.

Austin-Vance was arrested on deputies’ return visit Thursday afternoon and made an initial court appearance Friday on one felony count of unlawful manufacture of marijuana and two misdemeanor counts of endangering the welfare of a minor.

Jonothan Michael Vance, 37, and Melody Ann Barnes, 35, were taken to the Jefferson County Jail Wednesday on warrants for violating their probation terms in a 2014 conviction on second-degree animal neglect charges.

Both Vance and Barnes are due for arraignment on Oct. 11.

Those charges stem from a July incident in which he’s accused of choking two minors in a dispute, court records show.

Heckathorn said Thursday he doesn’t believe the pair will face any new neglect charges regarding the animals that were in their possession, though “that could change.”

He said the search warrant was amended so the firearm and marijuana products could be seized. The search team finished work at the home around midnight and was busy processing seized items Thursday, he said.

Court records showed no new formal charges yet against Barnes, though jail records showed she also was charged with illegally possessing animals and illegal marijuana manufacture.

Both were being held without bail following their initial court appearance Thursday, pending a return to court next Thursday at 1 p.m., a jail officer said.

The pair were arrested on Jefferson County warrants stemming from their 2014 conviction on second-degree animal neglect charges, the undersheriff said.

The sheriff’s office thanked the Three Rivers Humane Society in Madras for its help Wednesday, along with a local veterinarian who performed a wellness examination on each animal.

Heckathorn said the humane society was able to transport and will care for all of the animals at their facilities, pending the outcome of the case. The Jefferson County District Attorney’s Office also assisted in the investigation, and Heckathorn said more charges related to the raid are expected.

Heckathorn had no initial word on the animals’ medical conditions late Wednesday but said the couple’s arrest warrants were in regards to violating terms of their probation barring pet or animal possession.

Back in June 2013, Vance and later Barnes were arrested on neglect charges as authorities seized four horses – three mares and a stallion – they said were starving to death. That raid culminated a year-long investigation, sparked by tips from neighbors and passers-by.

A colt was born at Mustangs to the Rescue of Terrebonne hours after its mother was seized in that raid. Two goats and three dogs at the home that day were allowed to stay, as they appeared in good health, with adequate food and water.

Vance was convicted in April 2014 of three counts of second-degree animal neglect that included a 14-day jail term and several conditions, including not to possess any pet or domestic animal, or own or care for any horse for five years. Barnes was sentenced to a week in jail and the same five-year requirement not to possess any pet, horse or domestic animal. They were also ordered to complete animal cruelty prevention/education programs.

Last month, five misdemeanor counts were filed against Vance by DA Steve Leriche for violating a prohibition on possessing domestic animals, court records showed. A probable cause affidavit from sheriff’s Deputy Steve Keever said he spoke with a state Department of Human Services caseworker about the animals found in the home.