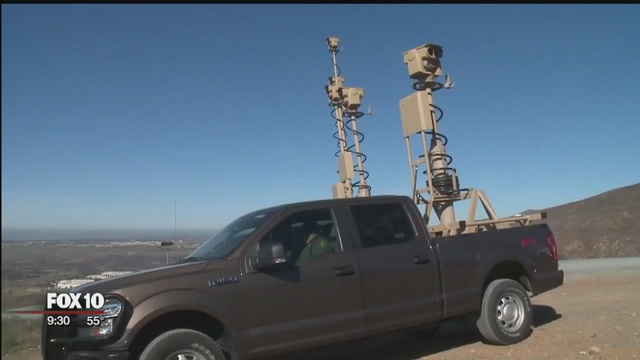 TEMPE, Ariz. (FOX 10) — On portions of the United States-Mexico border, there is new technology that detects and tracks illegal immigrants from up to six miles away, and the company behind this new technology is based in Tempe.

They’re called Benchmark, and they claim their surveillance system can do exactly what a wall can do, but for a ‘fraction’ of the cost.

The trucks can deploy and redeploy in about one minute, and some are already on the border, near San Diego. It represents a huge leap in cutting edge technology for the Border Patrol.

The mobile video and laser surveillance systems can spot border intruders, and automatically track them.

“It’s a game changer for them Border Patrol force multiplier,” said John Moulten, Benchmark’s Chief Technology Officer of Surveillance. “One agent who goes on patrol can multiply his vision many many miles.”

“The agents love the technology,” said Jan Janick, Benchmark’s Chief Technology Officer. “An example of that is the MVSS mobile video surveillance solution that we did for the Border Patrol. My engineering team has worked very closely with the Border Patrol. In fact, we have been on missions with the equipment and have been involved in the identification, interdiction of intruders on the border.”

Besides finding and tracking illegal border crossers, the truck’s systems can also work with drones.

“So, we’ve demonstrated to the Border Patrol the ability to marry a drone to the truck, and it will allow the agent — when the camera identifies an intruder, the agent can push a button, and the system is smart enough to launch that drone, send it out to the location of the individual, do surveillance of that individual, and return to the truck.”

Feedback from the Border Patrol has been very positive, and it’s a system that keeps border patrol agents safe.

“This technology also makes the agent safer,” said Janick. “It allows him to assess and get critical situation from a distance that’s much safer than right on the border.”

So far, Benchmark has delivered 14 trucks to the Border Patrol. All are deployed in either Texas or San Diego, and there are none in the Yuma or Tucson border sectors as of yet.