NFL Week 3 grades: Vikings get an ‘A-‘ for blowing out Raiders, Dolphins finally avoid an … 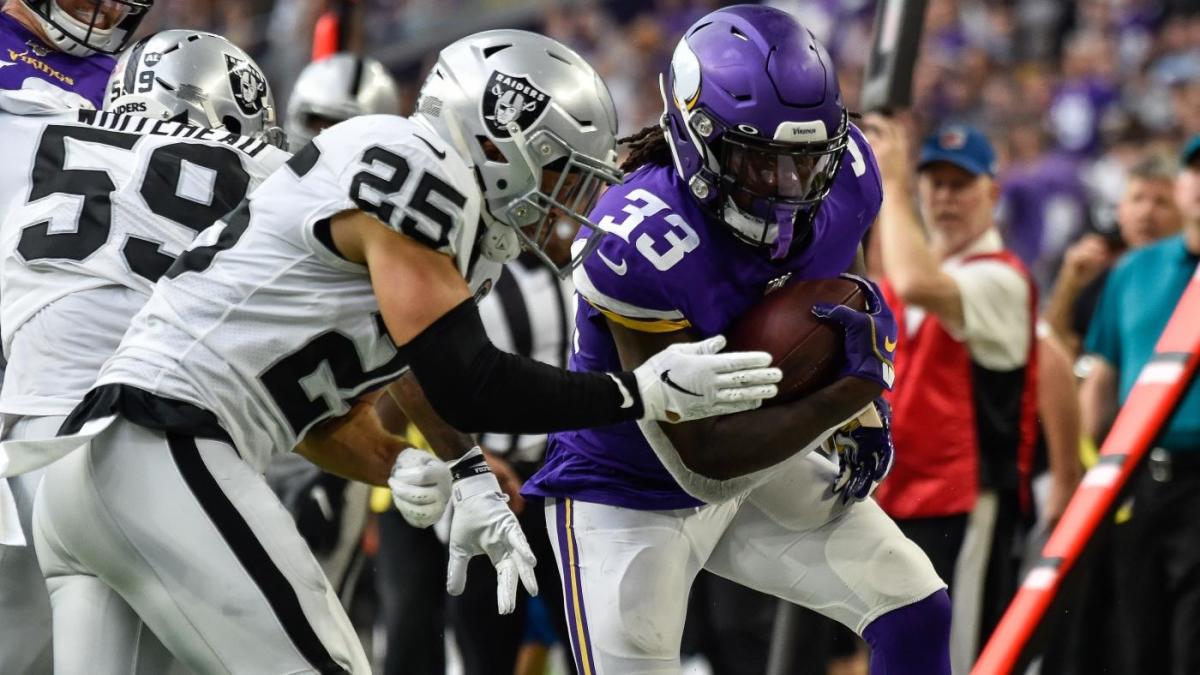 The Vikings have finally found the perfect recipe for winning games, and it’s a recipe that coach Mike Zimmer loves: Run the ball as often possible on offense and then let your defense do the rest.

That’s exactly what the Vikings did on Sunday as they steamrolled the Raiders for 211 rushing yards in a 34-14 win. Not surprisingly, Zimmer was pleased with how his team ran the ball against Oakland.

So what has made the Vikings ground game so successful this season? Zimmer explained after the game what he’s seen from his team, which went into Week 3 as the NFL’s third-best rushing team.

“Number one: Our coaches are doing a good job scheming,” Zimmer said. “And number two: I think the offensive line is doing a really good job of getting on the right people and creating some space.”

You want good scheming? Check out this one-yard run by Adam Thielen. Although one-yard runs aren’t usually too sexy, the Vikings called an inside hand-off to their wide receiver that caught the Raiders completely off-guard.

That was one of two touchdowns on the day for Thielen and put the Vikings up 21-0 in the second quarter.

As for Zimmer, he also noted that a big part of the running game’s success had to do with the amount of space the offensive line has been creating, and that was on display against Oakland.

Just look at the the hole below that was created for Alexander Mattison on his 10-yard touchdown run in the third quarter.

Mattison, who rushed for 58 yards, probably could have crawled through that hole and still scored.

There’s also one other thing that makes the Viking rushing offense go and that’s Dalvin Cook. Cook, who was the NFL’s leading rusher heading into Week 3, will likely keep that title after rushing for 110 yards against the Raiders. Zimmer has been especially impressed with Cook this season.

“He doesn’t need a lot of space, because he’s really good at slithering through holes,” Zimmer said. “Maybe the most impressive thing with him is his toughness in [between] the tackles, he doesn’t ever want to go down. He’s a physical runner with great speed and home run ability.

We can’t show you all of Cook’s runs here, but we can show you a 16-yard carry he had in the third quarter that basically epitomizes his abilities.

As you can see in that run, he “slithers” through the first hole, before making multiple people miss on a play that went for a first down, which was especially impressive because it was second-and-15 on the play.

Cook has been so good this season that he’s doing things not many other players in NFL history have ever done. Thanks to his performance against the Raiders, Cook is now just the fifth player in NFL history to rush for 110 or more yards and a touchdown in each of his team’s first three games of a season.

The Vikings have now gone over 200 yards rushing a total of five times under Zimmer and they’re 5-0 in those games.

Running over the Raiders is one thing, but if the Vikings want to prove they’re actually a contender in the NFC this year, they’re going to have do it against a better defense, and they’ll get that chance in Week 4 when they travel to Chicago to face the Bears.

Here are the grades for every Week 3 game on Sunday.