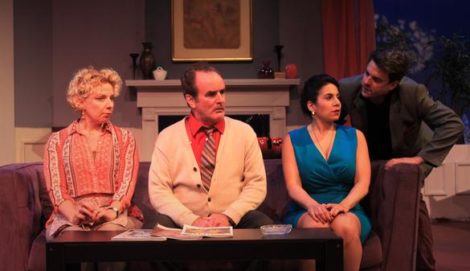 The Fourth Wall
By A.R. Gurney
Directed by Tim Howard

“Talk about me when I’m gone – that’s what life is all about.”

Jeremy Ellison-Gladstone as Floyd and Sarah Corey as Julia in the Oldcastle Theatre Company production of ‘The Fourth Wall.’ Photo: Richard Howe

Legacy is a concept, a battle fought by many and won by few. Playwright A.R. Gurney addressed that issue in many plays but never in one as odd and as laughable as “The Fourth Wall.” Written in 1992, it takes on the issues of theater tradition, life and its effect on the individual, political responsibility, and the “legend” of reality and its existence in this life. Set in Gurney’s home town of Buffalo, New York, it deals with a man whose homelife has been disrupted when his wife begins to rearrange their living room to create a perfect stage set with everything facing the “fourth wall” — the blank space that houses the audience. He invites a friend, a decorator, up from New York City to help him find a way to convince his wife that there is no sanity in her new obsession. He has also asked a local college teacher, whose specialty is theater, to assist in the process. Oddly, it turns out the wife’s real obsession is getting the president of the United States (George W. Bush) to think logically and to address the real problems of the world they all live in where a sense of angst exists instead of a sense of security.

This is one of the silliest premises Gurney ever projected onto his audience. In its current production at Oldcastle Theatre in Bennington, Vermont, the company does a great job in making this nonsense count, but even a great director and four superb actors fail a bit in the attempt. Still, it is a funny idea with funny lines and, for 94 minutes, it is entertaining, though a bit draining as incredulity becomes the byword of the evening. Then the miracle occurs and everything is fascinating again.

The characters, entering this room, are confronted with the odd arrangement of the room and fall into a theatrical presence and style of interacting. A grand piano, when touched, strikes up a Cole Porter tune all on its own. Ultimately the fourth wall is breached and a relieved character confronts the world as theatricals might, up close to an unsuspecting audience.

While Roger and his wife, Peggy, play out their scenario, Julia and Floyd create a subplot of their own, one which Gurney could have taken a bit further though he chose not to go to the ridiculous, leaving these two with their sublime option. Peggy is played by Amy Gaither-Hayes in a strong, nonwhimsical manner, giving the character’s madness that strong tinge of honesty that keeps the sanity of the touched real and convincing. Gaither-Hayes handles the oddest of moments with total simplicity and her performance, though maddening all by itself, is a gentle and wonderful one, especially in her final moments of realization, knowing that her beliefs are justified in spite of all the evidence to the contrary.

Sarah Corey as Julia, Peter Langstaff as Roger, Jeremy Ellison-Gladstone as Floyd and Amy Gaither-Hayes as Peggy in the Oldcastle Theatre Company production of ‘The Fourth Wall.’ Photo: Richard Howe

Peter Langstaff plays her husband, Roger, and is the perfect example of the Gurney male. He is obdurate and caught in his narrow thinking, holding to ways that are readily defined. His efforts to solve the problems his wife has thrown his way allow for some truly funny moments in this play, and Langstaff plays those for all they’re worth. His realization that his own constant is not necessarily a reliable star on this horizon is masterful and changes everything. I cannot picture a better actor for this role than Peter Langstaff.

Julia, the old friend and well-controlled vamp, is nicely played by Sarah Corey. She sings beautifully, moves with passion and, as her character develops her own subplot intended to draw attention, the actress moves Julia into focus where she becomes a silly, flirty, sensual version of herself, ultimately wooing, without sexual intent, a much younger man whose place in her life promises revelations; when they come, they are more of a surprise than anticipated. Corey handles every aspect of Julia beautifully.

In his first appearance with this company, Jeremy Ellison-Gladstone plays the theater professor whose logical approach to Peggy’s problem leads him on a journey from which he may never recover. Gurney opens up Floyd’s history slowly and leads him and Julia on a merry chase to the truth, a truth that pulls them far away from the main story and the effort to convince Peggy that she is on the wrong track. Gurney’s shift to these two characters almost makes this a draft for a different play, for this emphasis, while giving Ellison-Gladstone a wonderful scene to perform, opens the door to an alternative set of problems. The young actor here does a fine job with his “personal” story and he delivers nicely in the comedy that could lead to classic tragedy in the Greek drama-sense.

Tim Howard has directed the play in almost farcical style, especially as each character reacts to the layout of the room, falling into theatrical performance mode. He has kept things crisp and to the point and that works well for any Gurney, but particularly for this one. The play is set nicely on a set designed by Richard Howe. Ursula McCarty and Roy Hamlin have given the actors costumes that smack of both place and period while David V. Groupé’s lighting for the play keeps the world bright and perfect and yet, at the right moments, startling.

I did enjoy the play, although it is not a Gurney play that will stick around for long in my brain. Still, I liked it. It was a nice diversion played so well, and not a play I would have wanted to miss.

The Fourth Wall continues at Oldcastle Theatre Company, 331 Main St., Bennington, Vermont, through Sunday, Aug. 19. For information and tickets, see the Berkshire Edge calendar, go to oldcastletheatre.org or call the box office at (802) 447-0564.