Pamplin Media Group – What all the buzz is about 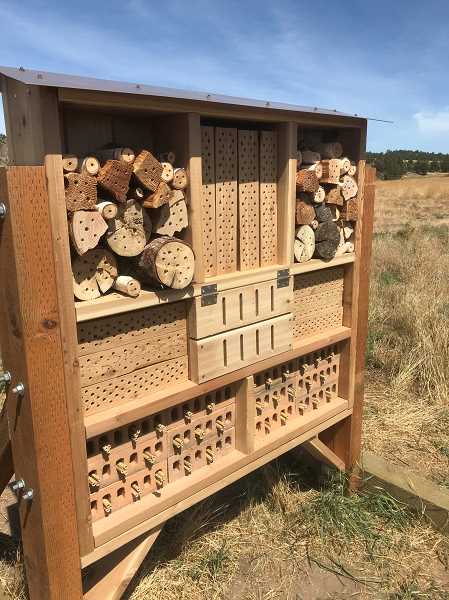 A municipality, a second grade class and an aspiring Eagle Scout team up on a pollinator hotel

Barnes Butte Elementary is all the buzz, as students have become part of a project that provides housing for local bees.

Academic Coach at Barnes Butte Elementary, Sarah Klann said that their school has collaborated on a number of projects with the City of Prineville. Most recently, their school became part of a plan that resulted in a pollinator hotel–a cozy structure for local bees to nest. It is housed at Barnes Butte Recreational area.

“We’re always dreaming and scheming about what is it we can do to bring our community together,” said Klann. “One of my biggest passions personally is advocating for pollinators.”

She said that the project unfolded about two years ago when Klann was approached by Instructional Assistant at BBE, Kim Griffin with an article about a project in another community that involved pollinators.

“Did you know that we can do something for pollinators right here,” exclaimed Klann. “Kim said, ‘what do you have in mind?”‘

Klann explained that she had researched about a pollinator hotel that supports native pollinators versus honey bees, which are prolific pollinators. Even though they don’t create honey, we benefit from them pollinating plants. Wild native bees are mostly pollen collectors. They collect the pollen to take back to their nests.

Griffin invited her to write a letter, pitching a project for a pollinator hotel to Our Savior’s Lutheran Church for a potential grant that fit the criteria. Klann included a proposal that included an Eagle Scout project, the City of Prineville and a classroom to be involved in the plan.

When Barnes Butte Elementary received the grant, Klann asked permission to work with a second grade class that was already working on the subject matter of pollinators. Kim Bartolotti’s class was doing just that, and Klann went in to do a lesson on native pollinators and their role.

“Some of our science standards are based around plants and pollinators, so this tied in perfectly,” said second grade instructor Kim Bartolotti. “In second grade curriculum, students are expected to develop an understanding of what plants need to grow and how plants depend on animals for seed dispersal and pollination.”

Bartolotti added that students had already learned about plants and pollinators through a four-week study provided by NatureHoods, in conjunction with the Children’s Forest of Central Oregon prior to this project opportunity.

Klann encouraged them to draw what they pictured for a “pollinator hotel.”

“If you could dream up your perfect pollinator hotel, what would it look like?”

Bartolotti’s students created the drawings, and she passed those on to the selected Eagle Scout, Patrick Covlin. Covlin is a senior at Mountain View High School in Bend, Oregon. He took the collaborative drawings to make a cohesive project that fit within his assigned budget.

“I liked building it, and helping out the community,” responded Covlin.

The project fit the criteria for an Eagle Scout project, which is the highest ranking for a Boy Scout. Covlin had a friend who had worked with City Engineer/Public Works Director Eric Klann, and Covlin was referred for the pollinator project for his Eagle Scout project. He worked alongside Eric Klann on the project.

He began in April, and completed the hotel two weeks ago. The structure is made up of rows of logs, bricks, and wood that has holes for bees to nest in. It has a portion dedicated in the center of the structure for butterflies, and the entire hotel has a sturdy wood frame. It is topped off with a metal roof. The materials were donated by a number of Central Oregon businesses, including Ridgeline Metal of Bend, Willamette Greystone of Bend, Havern Cabinetry and Design of Redmond and Parr Lumber of Prineville.

The completed structure was placed on skids, and was placed at the Barnes Butte Recreation area.

Klann indicated that Covlin is taking a shop class this school year, and hopes to put some identification on the structure that will communicate clearly what the purpose of the pollinator hotel is, and add some credits for creating the structure, with the help of Bartolotti’s class.

Quality local journalism takes time and money, which comes, in part, from paying readers. If you enjoy articles like this one, please consider supporting us.
(It costs just a few cents a day.)