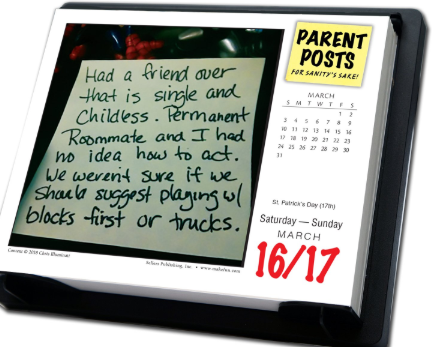 
Lawrence resident Chris Illuminati has found a lot of success in the writing world over the last decade or so. He’s written five books, countless articles for huge magazines and websites, and this week, his daily calendar — “Parent Posts For Sanity’s Sake” — goes on sale.

Do yourself a favor: If you’re a parent or know one — so yes, I mean every single person in the world — buy the calendar. It’s hilarious. Based on Illuminati’s wildly successful “A Message With A Bottle” website, it’s true-life little notes he’s written to himself concerning the daily battle that is parenting.

Things like this: “The kid thought there was a monster under his bed. I told him monsters are very quiet before eating a child and it’s probably just a burglar.” Or this: “I miss the days when ‘wake and bake’ didn’t mean ‘up at 5 a.m. with the kids and toasting cinnamon bread.’”

The calendar is on sale at Amazon right now and will be nationwide at your local big box stores in the coming months.

It’s funny, it’s brilliant, it’s spot-on. Which led me to wonder: How come I didn’t come up with this idea? What was the genesis?

“It was the first day I was watching my first-born, and my now ex-wife was going out for the day and listing everything I needed to do,” Illuminati said. “It was ridiculous. So I made a big show of writing them down. Things like, ‘feed baby,’ and ‘keep baby alive.’ About a month later I found it, still found it funny, and started writing more and posting them to a Tumblr account.”

“Yeah, it was weird seeing George Stephanopoulos hold up my note and read it on the air,” Illuminati said.

But by far the most *important* note he ever wrote is the note that started a war between Luke Skywalker and Captain America.

This was the note: “My son just asked the toughest question I’ve had to answer as a father … ‘Can a lightsaber cut through Captain America’s shield?”

Good question, right? OK. So one of Illuminati’s Twitter followers tweets the note, @ messaging Mark Hamill and Chris Evans in the process.

Hamill bit, responding, “In the #MarvelUniverse- NO In the #StarWarsUniverse- Luke wouldn’t fight a hero, but if asked to do so, he could cut it into a million little pieces.”

Evans took the bait with this brilliant retort: “ Foolish. Now I have vibranium ninja stars,” which I guess confirms his shield is made from vibranium, but that’s a column for another day. Anyway …

Anyway, the calendar: Buy it. If Luke Skywalker and Captain America are charmed by the concept, you will be to.

And for good reason.

Jeff Edelstein is a columnist for The Trentonian. He can be reached at [email protected], facebook.com/jeffreyedelstein and @jeffedelstein on Twitter.