Pep Guardiola: Man City boss says Blues chiefs have told him club will not be banned 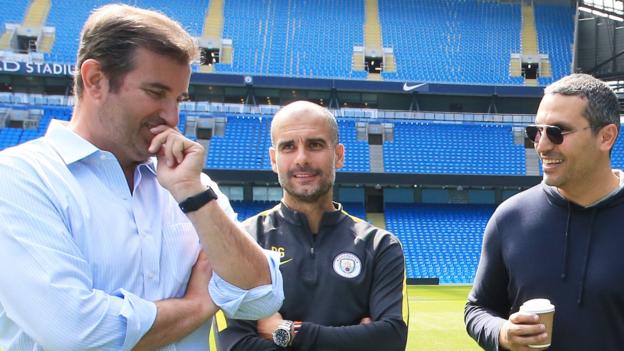 Manchester City manager Pep Guardiola says he has been assured by senior figures at the club that they will not be banned from European competition for Financial Fair Play irregularities.

A series of allegations were made in Der Spiegel last month after what City said were “leaks” and an “organised attempt” to smear the club were passed on by the Football Leaks organisation.

Reports this week suggested the claims could lead to City being banned should Uefa decide to take action, and a senior figure in European football told the BBC the entire credibility of FFP is at risk if Europe’s governing body and the Premier League do not fully investigate the allegations.

However, after speaking to City chairman Khaldoon al-Mubarak and chief executive Ferran Soriano, Guardiola does not think the club have anything to fear.

“That’s what I think because of what my chairman and my CEO have explained to me and I trust in them.

“If it happens, because Uefa decide that, we will accept it and move forward.”

Across four days of allegations in Der Spiegel, City were accused of using owner Sheikh Mansour’s own money to inflate sponsorship deals, using a third party, Fordham Sports Management, to offload image rights in order to reduce their wage bill, and, in the case of former manager Roberto Mancini, paying him more for his role as a consultant to Abu Dhabi club Al Jazira than he was getting from City as manager, excluding bonuses and incentives.

The European football source, who did not wish to be identified, said the fact the allegations came via the Football Leaks organisation and, according to City, were “purportedly hacked or stolen” should not prevent a thorough investigation to discover whether historical allegations are true and, as importantly, if breaches are being committed.

“Uefa and the Premier League have got to ask all the questions,” said the source. “They cannot make it easy otherwise credibility in the whole system will be lost.”

City were fined £49m for FFP breaches by Uefa in 2014 but were refunded £33.4m three years later after meeting the requirements of those initial sanctions.

In an exclusive interview with the BBC earlier this month, Uefa president Aleksander Ceferin said FFP rules needed to be more “robust” and admitted they were “weak” in certain areas.

The source said they accepted getting hold of all the relevant documentation would not be straightforward but that it should not be a deterrent to doing everything possible to establish the full facts.

Uefa has said it would reopen FFP investigations on a case-by-case basis if there was evidence of “abuse”.