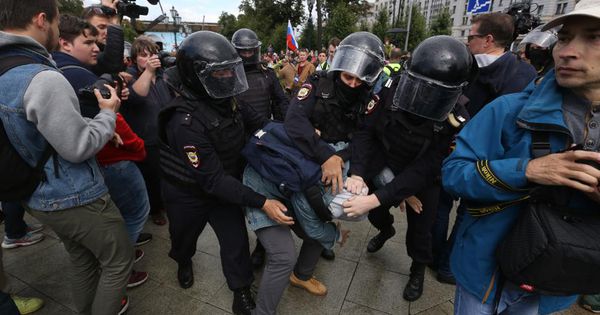 The start of September is a big day in the Russian calendar. Across the world’s largest country, children return to school after the long summer vacation. Proud parents may accompany them as the first day takes on a sense of ceremony.

Universities will also welcome their returning students. Like students everywhere, they will have spent summers taking a break from books, or trying to earn extra cash to support them during their studies.

This summer, some have been involved in political protests, too. A decision by the authorities to ban independent candidates from standing in elections to the Moscow city legislature sparked the largest demonstrations seen in the Russian capital for years.

Mass arrests followed, but failed to stop protesters from continuing to take to the streets.

The protesters are not exclusively young, but many of them are of that generation who have known Russia only with President Vladimir Putin at the helm. This summer marked twenty years since Mr Putin first became prime minister. Since then, he has been at the summit of Russian political power, either as president or prime minister.

While Mr Putin continues to enjoy impressive personal popularity ratings—even if the reliability of some of the figures was recently questioned—there are those among the coming generation who want to see change.

The elections to a city legislature would not, in normal circumstances, take on the status of a national political issue being closely watched internationally—but that is what has happened with the Moscow vote, due to take place on September 8.

The protesters views may not yet carry much influence in the wider political spectrum, but if Mr Putin’s first decade in office was characterized by rising living standards, and growing Russian prestige on the world stage, the picture recently has been less rosy.

With economists’ forecasts that incomes will fall in 2019 for the sixth successive year, there is the prospect—despite Mr Putin’s personal popularity—that his administration will be faced with broader political discontent.

Students’ return to their studies this autumn in Russia’s big cities brings new potential recruits to the protesters’ cause. The BBC recently reported that some students had set up a network to assist those among their number who had been detained.

Russia has a history of student activism driving radical change. The Bolsheviks leaders of 1917, Lenin and Trotsky, revolutionary ideas further during their studies.

Their is nothing comparable underway in Russia at the moment, but the authorities’ tough response to the protests so far suggests that they are taking absolutely no chances.

The numbers involved—and the numbers of participants detained— are surprising in a country where permission to protest legally against the government is often only grudgingly granted, if it is given at all. More than a thousand people were reportedly detained after a rally in late July. This did not stop tens of thousands taking to the streets two weeks later.

The day after that demonstration, the Russian authorities asked Google to stop YouTube showing footage of what they termed “illegal mass events.” The authorities’ treatment of reporters covering the protests prompted demands from several media organizations that they stop the “harassment of journalists.”

Like their counterparts in the United States and across the world, Russian students will shortly face the academic challenge of returning to university after the summer— but the sternest test in Russia this fall may be that facing the authorities as they contend with the prospect of further political protests.