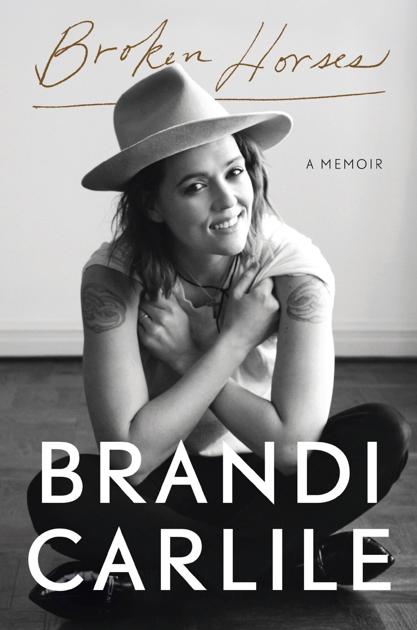 Armed with a powder-blue cowboy hat bedazzled by her mother, a homemade vest and a turquoise bolo tie made by her great-grandfather, Brandi Carlile gave her first solo performance at the Northwest Grand Ole Opry Show at 8 or 9. The deal was sealed.

“The applause at the end was the nail in the coffin of any other path I might have gone down in life,” writes Carlile. “I never wanted to leave that stage.”

In Carlile’s memoir “Broken Horses,” she shares the story of how a “shy and quiet but very clever” kid who grew up in a “run-down single-wide mobile home up on top of a mountain” in Washington went on to become close friends with her childhood hero Elton John, win multiple Grammys and produce country icon Tanya Tucker’s last album.

Thirty-nine may seem a little young to write a memoir, but in Carlile’s opinion no one is too young, too old or too uninteresting to write their own story.

“Your life is in fact twisted and beautiful and you’ll find that as you peel back the layers, the unexpected side effect is that it feels wonderful to be known,” she writes in her acknowledgements. “Even if it’s just by you.”

“Broken Horses,” shines for this very reason. It’s clear that through writing the full arc of her story, not only does the reader get to better know the Americana singer, but she begins to better understand herself.

“I think that because of the way I grew up poor and failing in school, because I was the only gay person in such a small town, because I was often nervous, humiliated and turned away from even church, I had an unresolved hurt deep within me that I wasn’t paying too much attention to,” she writes.

She’s perceptive, vulnerable, humble, funny and above all else, a good story teller. She’d already proven her storytelling chops as a lyricist and she proves them once again in these pages. She knows how to use a few words to make a big impact. Without going on a tangent about gun rights, she simply states “he should have never been allowed to own a gun” after a close friend takes his own life.

After spending years laying herself bare in her songs, she lets down yet another wall in the pages of “Broken Horses.” For longtime listeners, Carlile gives context and color to her songs and career highlights. From the note she feared she wouldn’t hit at the 2019 Grammys to the story behind “Turpentine,” lyrics and moments are given fresh meaning.

There will always be two sides to Carlile — the side that’s seen on stage and the side that enjoys nothing more than to go fishing. In “Broken Horses,” readers meet both and walk away feeling like they know the real Carlile.

“Anyone who hasn’t read this book wouldn’t understand the dance between the rugged side of me and the one who loves to shine,” she writes.

She’s a woman who can write a killer song and who built her firstborn’s nursery. She’s someone who’s always been anxious, but was brave enough to perform Joni Mitchell’s “Blue” in its entirety with Mitchell herself in the audience.

Her resilience has seen her through her fair share of hardship because she knows, in the end, she’ll have the last laugh — “The joke’s on them.”