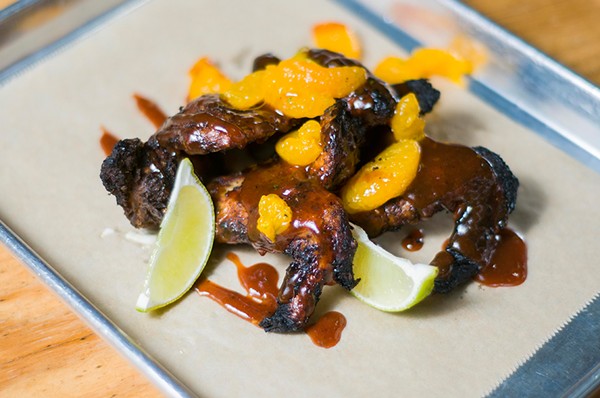 Chef Maxcel Hardy has expanded from his deservedly popular River Bistro in Rosedale Park to a stall at Midtown’s Detroit Shipping Co. food hall. Whereas the emphasis at the Bistro is on soul food, Coop’s inspiration is a Caribbean food truck. Familiar island favorites jerk chicken, rum cake, and ginger beer do make room, though, for Southern fare like mac and cheese and Brussels sprouts with bacon.

Coop is one of three food stalls plus a coffee shop/ice cream parlor arranged around a communal indoor space that often features musicians or other performers. You order, get a buzzer, and wait at a picnic table to be called, and find your alcohol at the common bar. Hardy’s operations manager Pilar Doakes says that because of the entertainment and the “different culinary talents, it’s an experience in itself, you’re not just going for the jerk wings.”

Be that as it may — I’ve tried all three stalls and liked all three — the jerk chicken is terrific. You can get wings, a quarter bird, or a half. The four irregularly cut pieces in my beautifully moist quarter were garnished with mandarin orange sections and lime wedges, and bathed in a sauce that started sweet but followed much longer with a gradual heat. Hardy uses guava purée, ginger, garlic, thyme, and a Scotch bonnet. The bird was an incredible bargain for $7.

You can also get chicken sausage on a grilled pineapple with the same treatment. Or there’s a wings happy hour Monday through Thursday from 4 to 7 p.m., where you can score wings for a dollar apiece.

Also excellent is a tall skirt steak sandwich on Texas toast. You have to be careful with skirt steak not to toughen it, and Hardy keeps his tender, jerked with pineapple, and crunchy with coleslaw. Each ingredient makes itself assertively known, including some queso fresco.

I hadn’t tried Caribbean corn on the cob before — it’s similar in concept to the Mexican elote bathed in mayo, cotija cheese, cayenne, cilantro, and a lot more. I’ve seen lines at elote carts in Mexico that stretched on for a block, partly because the treat is so popular but partly because it takes a while to throw all those ingredients onto each cob.

In Hardy’s Caribbean version the corn itself is done just right. It’s rolled in a creamy cilantro aioli and sprinkled with bacon, coconut, bread crumbs, queso fresco, and Old Bay spice mix, which makes for a pretty complex experience. You get plenty of extra fixings, too, for additional rolling. Or you can order fries with most of that same stuff. Or you can order a Midtown Crispy Chicken Sandwich with those ingredients plus coleslaw plus the guava barbecue sauce.

On the Southern side, Hardy has brought over his popular Brussels sprouts, with some changes. They’re enhanced with queso fresco, bacon, cilantro, and maple syrup — just a touch of the latter, not enough to ruin the smoky umami of the other ingredients.

There’s also sometimes a chicken and waffle, for those who do want their syrup prominent. The waffle is soft, the chicken ideal — crusty, peppery, juicy, and not really spicy.

The only dish I couldn’t endorse was a bland mac and cheese with an unidentifiable topping. This was surprising, since I’d loved the creamy three-cheese mac at River Bistro. Perhaps it was just an off night.

For drinks, there’s a candy-pink punch that is sweeter than it is gingery, and, better, Tana Falls ginger beer in a bottle, more gingery than sweet. Tana Falls, based in Toronto, brags of its all-natural ingredients and “our Jamaican grandmother’s” recipe.

I have to complain once again about Detroit Shipping Co.’s commitment to low-end plasticware and “napkins” that are literally a roll of rough brown paper you might see in a restroom — tear your own. (This applies to all three food stalls.) A veteran visitor to the space by this point, I had totally intended to bring my own knife, and regretted much not having it when it came to cutting my chicken. You can eat with your fingers, of course, but the brown paper is lousy at wiping the stickiness off. Management, invest in a dishwasher!

So many restaurants, so little time. Sign up for our weekly food newsletter delivered every Friday morning for the latest Detroit dining news.