On August 7, the Russian oil company Rosneft (OTCPK:RNFTF) presented its results for the first half of 2018. Quotes reacted with the growth of 2%, which made the company the most expensive in Russia by market capitalization, surpassing Sberbank (OTCPK:SBRCY). In addition to excellent quarterly results, the company recently introduced a new development strategy until 2022, the main points of which will be a decrease in the debt burden, buyback, and dividends of 50% of net profit. Despite the fact that Rosneft’s shares reached a 52-week high, they still have quite a lot of potential for growth primarily due to changes in the strategy.

Rosneft is the largest Russian oil and gas company. The company operates in 26 countries around the world and occupies 6% of the world’s oil production and 41% of the oil production in Russia. The CEO of the company is one of the friends of President Putin – Igor Sechin. The Chairman of the Board of Directors is former German Chancellor Gerhard Schroeder. The capitalization of Rosneft is 4,450 billion rubles (about $68.5 billion).

The main feature of Rosneft for many years was the aggressive behavior in the M&A market. Over the past few years, Rosneft has acquired such companies as Bashneft, TNK-BP, and Yukos.

The largest shareholder of Rosneft (50%) is the Russian Government through Rosneftegaz. British Petroleum (BP) owns 19.75% of the shares in the company. The third largest shareholder is the Qatar QIA fund with a 19% stake, and the remaining shares are in free float. (source: Rosneft 2017 report, p. 246)

A few days ago, Rosneft presented its financial results for 2Q18 and 1H18. Net profit for the first half of 2018 grew more than 4 times, EBITDA increased by 48%. Below is a picture of the company’s presentation describing the drivers of the change in net profit and EBITDA. 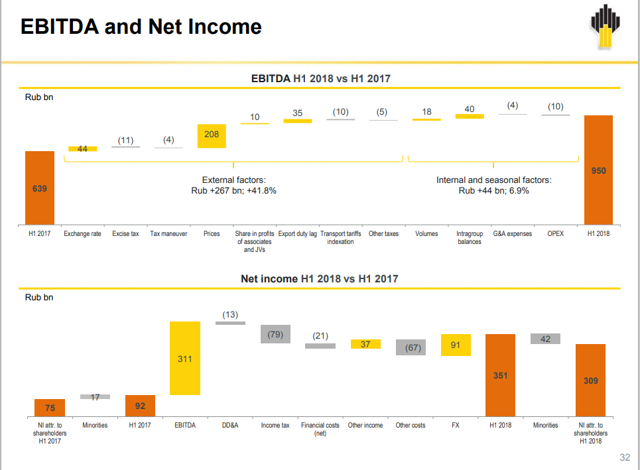 The second half of 2018 is also likely to take place with high oil prices and a weak ruble.

Oil prices should support the current agreement between the countries belonging to OPEC+ and the reduction of exports from Venezuela and Iran. Despite the fact that the OPEC+ agreement was amended to increase the level of oil production by 1 million barrels per day from current levels, the overall quota limiting production is preserved. Thus, by the end of the year, the participants in the OPEC+ deal pledged to adhere to previously reached agreements to maintain a balance in the market. The reduction in exports from Venezuela is caused by the economic crisis, and the reduction in exports from Iran is caused by new severe sanctions from the US. The CEO of Rosneft predicts the price of oil to be $75-80 per barrel by the end of the year.

In my opinion, the USD/RUB rate will continue to grow due to the dividend period, at which ruble dividends received from all Russian companies are converted into foreign currencies by owners of depositary receipts and foreign shareholders, together with possible sanctions for Russian public debt.

Another driver for profit growth in the second half of 2018 should be an increase in oil production due to changes in the arrangements of OPEC+. Already in the 1H18 report, Rosneft said that it was pleased with how quickly the company was able to return to the required volumes of production.

Therefore, if Rosneft’s net profit in the second half of the year remains at the level of the first half year, the aggregate net profit for 2018 will be 620 billion rubles (about $9.5 billion) compared to 222 billion for 2017.

Earlier this year, Rosneft accepted a new development program for the company until 2022. The main directions of this program are the optimization of costs, reduction of debt, and increase the profitability of shareholders through the buyback.

The Board of Directors supported the additions to the company’s development strategy until 2022, in which the key points are the reduction of the debt and investment program, as well as the repurchase of shares on the open market. Rosneft plans to optimize operating costs through the completion of the capital investment program. The company will reduce the debt burden and trade obligations by at least 500 billion rubles in the current year. – Gerhard Schroeder

In addition, Gerhard Schroeder stated (Schroeder interview in Russian) the company’s goals for increasing the efficiency of current assets, which can be considered as a lack of interest in continuing aggressive acquisitions.

In the near future, Rosneft will focus on improving the efficiency of the existing portfolio of assets and reducing the debt burden. – Gerhard Schroeder

The growth of profit and free cash flow will help to increase the value proposition for income investors through dividend payments. Earlier this year, Rosneft decided to switch to payments of 50% of net profit.

Net profit for 2017 amounted to 222 billion rubles, and the shareholders received 10.5 rubles of dividends per each share of the company. The current price of one share of Rosneft on the Moscow Stock Exchange is 429 rubles. When net profit reaches 620 billion in 2018, investors will receive about 30 rubles per share. Dividend yield will be 7%. According to the dividend policy, payments are made twice a year.

In addition, until 2020, a buyback program for 133.5 billion rubles (about $2 billion) will be implemented, which will allow the company to buy a 3% of Rosneft shares. The CEO of the company, Igor Sechin, said he was convinced of the fundamental underestimation of Rosneft’s market value.

Despite Rosneft’s 52-week peak, the potential for growth is still there. P/E 2018 is at the level of 7-7.5x which is quite low for a fast-growing company. In the Russian oil and gas sector, this multiple is only higher for Tatneft (OTCPK:OAOFY) 8.5-8.7x, while Rosneft’s international competitors, represented by Exxon Mobil (XOM) and Royal Dutch Shell (RDS.A), have P/E multiples of 13-14x.

The new development strategy should also attract a lot of new investors, aimed at high dividend yield and constant growth of dividend payments.

Disclosure: I/we have no positions in any stocks mentioned, and no plans to initiate any positions within the next 72 hours.

I wrote this article myself, and it expresses my own opinions. I am not receiving compensation for it (other than from Seeking Alpha). I have no business relationship with any company whose stock is mentioned in this article.

Editor’s Note: This article discusses one or more securities that do not trade on a major U.S. exchange. Please be aware of the risks associated with these stocks.