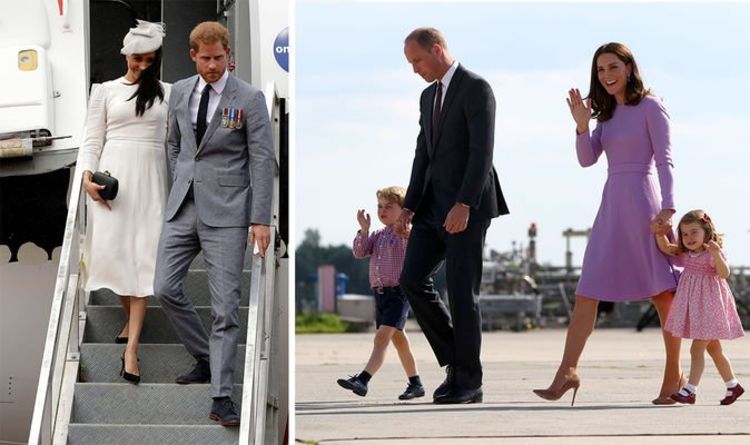 The Royal Family are no strangers to travel, and have had a private aircraft in their family since the Queen was young. However, as the public become increasingly aware of environmental challenges, many of the royals have been slammed for excessive use of private aircraft. With the younger royals leading the way for changes to tradition, Princes William and Harry have swapped their luxury travel to become frequent fliers on some budget airlines. As part of Channel 5’s documentary ‘Secrets of the Royal Flight’, experts have revealed exactly how they manage to go unnoticed on aircraft filled with passengers.

Royal Correspondent Emily Andrews lets slip a few of the tips shared by the young princes.

She outlines one occasion, in the early stages of courtship, when Harry and Meghan flew to Norway using Norwegian Air.

Despite being on a packed plane full of members of the general public, the two managed to sneak on board without the bat of an eyelid.

She said: “Harry and Meghan are two of the most famous people in the world. They went to Norway in the early stages of their relationship.

“It was Norwegian Air.

“No one on that plane knew that Harry and Meghan were on because the whole plane had boarded, they were driven to the back steps, they walked up, they had baseball caps on, snuck into the back seats of the aircraft.

“No one even knew they were there.”

However, it seems Harry and Meghan aren’t the only two covertly slipping onto aircraft. William and Kate also have a few tricks up their sleeve to ensure they go unnoticed.

Andrews adds: “Kate and William on their 2014 tour to Australia travelled under the names of Mr and Mrs Smith and Prince George who was 8 or 9 months at the time was baby Jones.”

Aviation Journalist Keith Wilson says this is because the younger generation of royals are “two of the most down to earth members of the Royal Family”.

He states: “For them to go and use a budget airline to get somewhere quickly recognises a certain sense of responsibility. Why not? Good for them.”

The documentary points out that the switch to commercial travel over exclusive jets and helicopters is largely down to the younger generation of royals being “more media savvy” and “attuned to public opinion”.

Both of the princes were in the media spotlight this past summer for their travel habits.

While Prince William and his family were commended for hopping aboard a Flybe flight for their journey home from Balmoral, Prince Harry and Meghan were under fire.

The new parents were condemned by the public and media after taking 4 private flights in 11 days for their personal holidays despite being climate change advocates.

The pair were flying between luxury holidays in Ibiza and Nice.

Harry also came under fire after taking another private jet to Sicily where he attended a Google climate change conference in July.

Andrews does point out that these private journeys are likely to become less frequent. She concluded: “I think that for their public duties the younger royals will continue to travel commercially because it is more cost effective.”