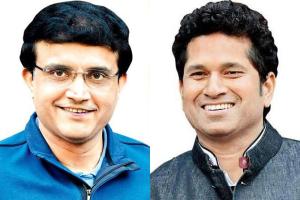 Both Sachin Tendulkar and Sourav Ganguly had shared their views on the persisting question regarding whether India should play Pakistan in the upcoming ICC Cricket World Cup 2019.

Recently, Indian cricket legends and good friends Sachin Tendulkar and Saurav Ganguly voiced their opinion on Twitter over the issue of the India-Pakistan match scheduled in the ICC Cricket World Cup 2019. Just like their opening stands, where they initially weathered the storm to gradually dominate and succeed as partners, the twitter exchange which seemed like a difference of opinion ultimately turned out to be a friendly exchange of words among the two stalwarts of Indian cricket.

India’s cricketing ties with Pakistan in the near future looks in jeopardy following the terrorist attack by Jaish-e-Mohammed in Pulwama, Kashmir, which claimed the lives of more than 40 CRPF jawans. The Indian cricket fraternity has a varied opinion, while a majority of former Indian players have voiced their opinion that India should not play Pakistan, some former players have reasoned that by not playing, India will be gifting free points to Pakistan.

Sachin Tendulkar, speaking on the issue, he said, “India has always come up trumps against Pakistan in the World Cup. Time to beat them once again. Would personally hate to give them two points and help them in the tournament,”

“Having said that, for me, India always comes first. So whatever my country decides, I will back that decision with all my heart,” the batting legend said.

Sourav Ganguly, speaking at an event, was asked to react to Sachin Tendulkar’s remarks on the issue, the former India captain responded by saying, ” Sachin Tendulkar wants two points against Pakistan, I want the World Cup.”

Many fans seemed to think Sourav’s statement was in disagreement with Sachin’s comment on the issue.

Sachin Tendulkar immediately responded to Sourav Ganguly’s clarification on Twitter by tweeting, “Never felt the need for you to justify. Strongly believe that all of us want what’s best for our nation.”

Never felt the need for you to justify. Strongly believe that all of us want what’s best for our nation. https://t.co/zUZYBVlCdh

Well, the issue seems to have been sorted out between the two legends for now, but it will be interesting to see what decision, will the BCCI and the Indian government take on the scheduled India-Pakistan match later this year.

Catch up on all the latest T20 news and updates here. Also download the new mid-day Android and iOS apps to get latest updates

The article has been sourced from third-party source and Mid-day accepts no responsibility or liability for its dependability, trustworthiness, reliability and data of the text. All information provided on this article is for informational purposes only.