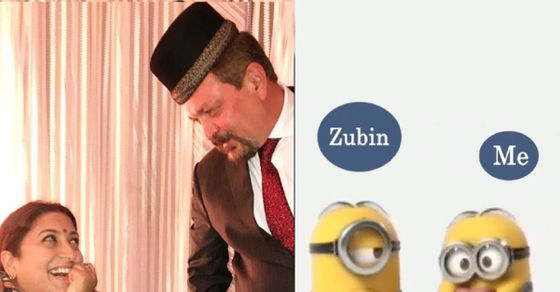 
Smriti Irani shared a hilarious video of herself and her husband Zubin in which they represent minion characters.&nbsp | &nbspPhoto Credit:&nbspInstagram

Union minister Smriti Irani is known for entertaining her social media followers with her witty sense of humour. She regularly shares hilarious memes and jokes on her Instagram handle.

On the occasion of Children’s Day, Irani shared a funny video of minions and captioned it, “This children’s day, say thank you to the ‘Zubin’ in your life who keeps the child in you alive.”

Watch the video below:

The minion characters are named after her and her husband Zubin Irani. The minion representing the minister keeps on laughing, making faces and even punches the other minion, named Zubin, on hand while he stands with a straight face.

The post, which has gone viral, has received over 39,000 views. A user said, “That’s the cutest thing.” While another wrote, “When I’ll be the PM of India in future I’ll definitely appoint you as my cabinet minister for Ministry of Memes & Humor.”

In August, Irani had shared a series of photos of mouth-watering dishes she ordered at Cafe Madras in Mumbai, including Upma Podi, Rava Adai and Tuppa Dosa. She had added a hilarious disclaimer after the photos of her “khalaas meal” which left netizens in splits. The disclaimer read, “For all those who thought I ate all that food myself, Think again.”

Back in July, the Minister of Textiles had posted a picture of herself from her ‘Kyunki Saas Bhi Kabhi Bahu Thi’ days and captioned it, “#when @ektaravikapoor gets to you before the #faceappchallenge #tbt.”