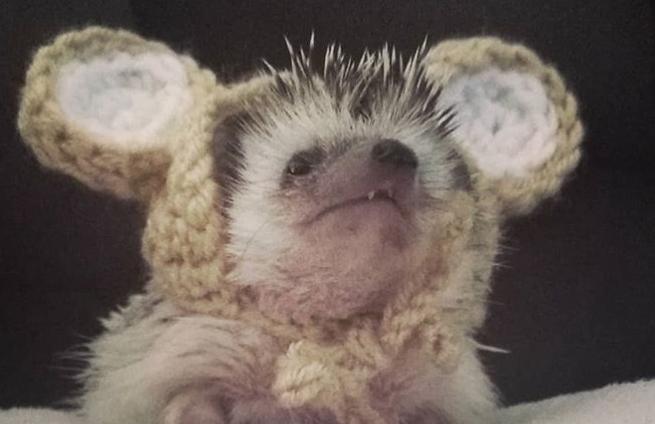 DEVINE — Wilbur the hedgehog leads a charmed life: A popular video on the animal lovers’ website, The Dodo. Custom-made crocheted little hats that rack up the likes on Instagram. Only the best in Target fruit strips for nibbles.

And to think just this summer he nearly died by his mother’s own teeth. Five months ago, he was an injured newborn, a pink, see-through critter the size of a thumb, whose mother had also devoured two of his fellow litter mates and fatally bit another.

Now he nestles in the cupped hands and online posts of Melissa Schreiner, an animal lover in Eagle Pass who’s taken all sorts of animals under her wing, with Wilbur poking his spiky little head above the pack.

FIND OUT FIRST: Get San Antonio breaking news directly to your inbox

“Wilbur can get attention that I can’t get,” Schreiner said. “He’s so unique, and his personality is pretty adorable. As you can see, he’s rough around the edges, but he’s very special. He’s just … Wilbur.”

“I try to tell her he was a Sonic,” said Schreiner’s close friend Malissa Polen, who recently hosted Wilbur, Schreiner, and Schreiner’s 4-year-old daughter, Brooke, at her own ranch in Devine.

Schreiner said she always knew Wilbur was a Wilbur, more a reference to the pig of “Charlotte’s Web” than the zippy hedgehog of the Sega video games (though Wilbur certainly has raced to the forefront of animal advocacy and all around adorableness).

RELATED: Giving pets holiday gifts a trend on the rise

In addition to scurrying up thousands of likes and followers on his Instagram account, @wilburstale, Wilbur also has starred in his own Dodo video with more than half a million views on the site’s YouTube channel. And he has his own dot-com with wilburstale.com.

Sandy Tovar, who runs The Buddy Foundation animal rescue group in Eagle Pass, has been following Wilbur’s tale from the beginning.

“Wilbur is just an amazing character,” Tovar said. “Not only because he’s cute as a button, but when I found out Melissa rescued him as a tiny hedgehog, the chances of him making it were pretty slim. It’s just an amazing rescue story.”

Wilbur needed help pretty much as soon as he was born in late June.

Schreiner had heard of a young woman in Eagle Pass who was breeding hedgehogs for sale and was having trouble with a recent litter. Schreiner offered to help with the surviving two baby hedgehogs and raced to her home.

One of the baby hedgehogs died on the way back, right in the hands of Schreiner’s other daughter, Gabby, 15. As for Wilbur, Schreiner recalled he somehow survived his mother’s attack but was still cold as a Popsicle.

Bringing Wilbur back from the brink wasn’t easy. Schreiner had no previous experience with a hedgehog, and her go-to veterinarian only worked with larger animals, such as her dogs and horses.

So Schreiner turned to Google, researching any tips she could find. She even consulted a hedgehog rescue group in the United Kingdom, where hedgehogs roam wild like rabbits.

In addition to his bite wound, Schreiner learned Wilbur also was suffering from bloating, a condition hedgehogs are prone to which can be painful and even fatal.

“It was very touch and go,” Schreiner said.

Schreiner tried infant gas drops as well chamomile tea and even probiotics in Wilbur’s milk formula to minimize his bloating. Wilbur would spend his first fateful weeks slumped on a heating pad at Schreiner’s bedside, where she often woke up to bottle feed him at the first squeak.

As for Wilbur’s injury and general hygiene, Schreiner learned to clean him with coconut oil on a toothbrush.

At first, Wilbur weighed only about 8 grams, the equivalent of a quarter and a penny. Schreiner knew he was finally out of the woods when at six weeks old he ate his first solid food, a mash of formula and hedgehog food, right on Polen’s kitchen counter.

That wasn’t the only delightful first at Polen’s home.

“Wilbur swam in our pool here,” Polen said. “We had him in a drink cup holder shaped like a flamingo. And he gave my baby alpaca his first kiss.”

RELATED: This holiday season adopt, don’t shop, for a pet

In addition to puckering up with Sheldon the alpaca, Wilbur also began cozying up to the various animals on Schreiner’s own ranch, which in addition to herself, her husband and their two daughters includes five dogs, three cats, three horses, Gabby’s ferret, a duck and several chickens.

Such moments with Schreiner’s animals make adorable snapshots. But Wilbur pulls the serious awwws when it’s just him being, well, Wilbur — especially when he models one of Schreiner’s tiny crocheted hats, which she sells on the Facebook page Wilbur’s Wardrobe to offset her animal rescue costs and get more animals adopted. They start at $5 and can be custom ordered.

“Most of the time I rehouse my rescues,” Schreiner said. “With the exception of my Wilbur.” Schreiner has cared for animals pretty much since she was a kid growing up in Germany.

It started with a falconlike baby bird named Fluffy, which Schreiner found one day covered in greasy water. Fluffy’s rescue lead to many more saved animals and insects, be they snails or lizards or just about any other creatures great and small.

Schreiner volunteered at a military base veterinary clinic in Germany. Then when she moved to the United States at 14, she volunteered at a zoo and also a pet store in Alamogordo, New Mexico. After she got she married, she moved to Las Vegas and continued working with animals at a vet clinic and then an animal shelter.

Since moving to Eagle Pass almost four years ago, Schreiner has focused on animal rescue full-time. Which brings up another reason she loves to share Wilbur’s tale: to raise awareness of animal care in the Texas town she now calls home.

Soon after moving to Eagle Pass, Schreiner became fast friends with Tovar and The Buddy Foundation, which is named after the Golden Retriever the Tovar family lost in 2016.

Tovar said it’s been an uphill struggle to boost animal rescue and animal advocacy in her community, but slowly more people have come to see the value of animal rights and to see their pets more as part of the family.

“It’s just heartwarming to see how the community itself has changed,” Tovar said.

Especially when a friendly, furry face like Wilbur’s encourages that change.

“People that had no interest at all in rescuing animals will come and ask me questions about Wilbur,” Schreiner said. “And it really opens the conversation for me to tell them about other animals that need help, too.”

These days, Schreiner said Wilbur plays more to type as the typical shy and nocturnal hedgehog, huffing and puffing whenever he’s exposed to strangers or an unfamiliar environment.

He now spends more time in his “snuggle sack,” a bumblebee-covered felt pouch Schreiner sewed that looks like a wine bottle holder. Though he still climbs all over Schreiner and in her hair whenever it’s just the two of them on the couch watching television.

Schreiner couldn’t be happier to see Wilbur not only survive but come into his own. Besides, they still have much in common.

“I just think that me and his personality just click,” Schreiner said. “I’m not as good with people as I wish I was. But with him, I understand him. I can relate to him. He’s afraid of everything, but yet he wants to see what’s going on.”

And as a face for animal rescue, Wilbur should continue to have plenty of appreciative and supportive company.

René A. Guzman is a staff writer in the San Antonio and Bexar County area. Read him on our free site, mySA.com, and on our subscriber site, ExpressNews.com. | [email protected] | Twitter: @reneguz