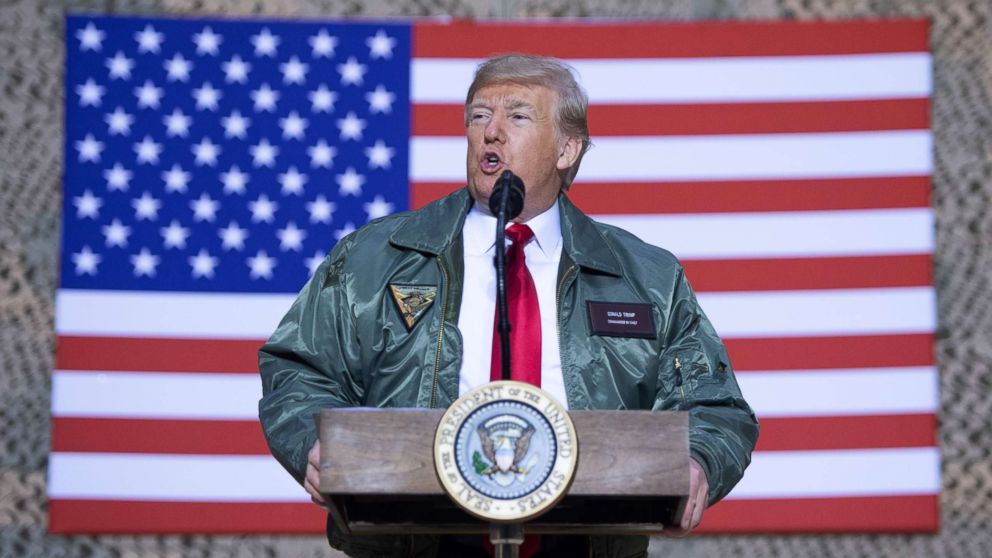 President Donald Trump struck overtly political chords as he addressed service members during a speech at the al-Asad Airbase in Iraq Wednesday -– his first visit to an overseas military installation.

Add Donald Trump as an interest to stay up to date on the latest Donald Trump news, video, and analysis from ABC News.

Abandoning, as he has before, the traditional maxim of politics ending at the water’s edge, the president said his military strategy puts an end to the United States being “suckers” and hammered Democrats for resisting his demands for border wall funding.

The president appeared to lie to the assembled soldiers about their pay raise this year and re-enacted a conversation with his military advisers who he claimed had encouraged him not to remove American troops from Syria.

In past visits abroad the president has frequently admonished allies to be more committed to fights taking place in their own backyards. During the speech at al-Asad, Trump revisited that theme, saying that countries must sometimes pay a “monetary price” for the United States’ military involvement, “so we’re not the suckers of the world.”

“We’re no longer the suckers, folks. And people aren’t looking at us as suckers… We’re respected again as a nation,” Trump continued.

The president noted that “stopping terrorists from entering America’s shores” is part of a broader strategy of homeland security. Then, taking a political turn, Trump said his political rivals are only blocking a more robust border wall out of blind opposition to everything he proposes.

“I don’t know if you folks are aware of what’s happening — we want to have strong borders in the United States, the Democrats don’t want to let us have strong borders. Only for one reason. You know why? Because I want it,” he said.

Trump said the “brilliant young faces, these warriors” in the crowd were inspiring him to try a new strategy, in which he insists he does not want a wall after all.

“I think I’ll say, I don’t want the wall. And then they’re going to give it to me! I figured out the solution,” he said.

While praising the soldiers’ contribution to the causes of justice and peace, and stating that the U.S. government will always protect its soldiers, Trump incorrectly took credit for the annual pay raise the military received.

“Is anybody here willing to give up the big pay raise you just got?” he surveyed the crowd. “Raise your hand please. Oh, I don’t see too many hands.”

He continued, citing numbers that have since been debunked and declared untrue.

As the independent fact-checking site PolitiFact noted, the military has received a routine pay raise every year since at least 1961. The 2.4 percent increase that went into effect in 2018 was the largest since 2010, but they have continued apace every year.

Trump then falsely asserted that the pay increase was actually 10 percent, recounting phony conversations in which “plenty of people” tried to impose a smaller raise.

PolitiFact, which had fact-checked earlier, similar utterances from the president, has rated these claims Pants on Fire.

Trump also reenacted conversations he said he had had with “our generals” over U.S. presence in Syria. Outgoing Secretary of Defense James Mattis and Syria envoy Brett McGurk both submitted their resignations following Trump’s announcement that he was removing all 2,000 troops from Syria.

“One year ago I gave our generals six more months in Syria,” Trump recalled. “I said, ‘Go get ’em. We need six months. Go get ’em.'”

“And they said, ‘We need another six months,'” Trump continued.

“Then they said, ‘Can we have like one more period of six months?'”