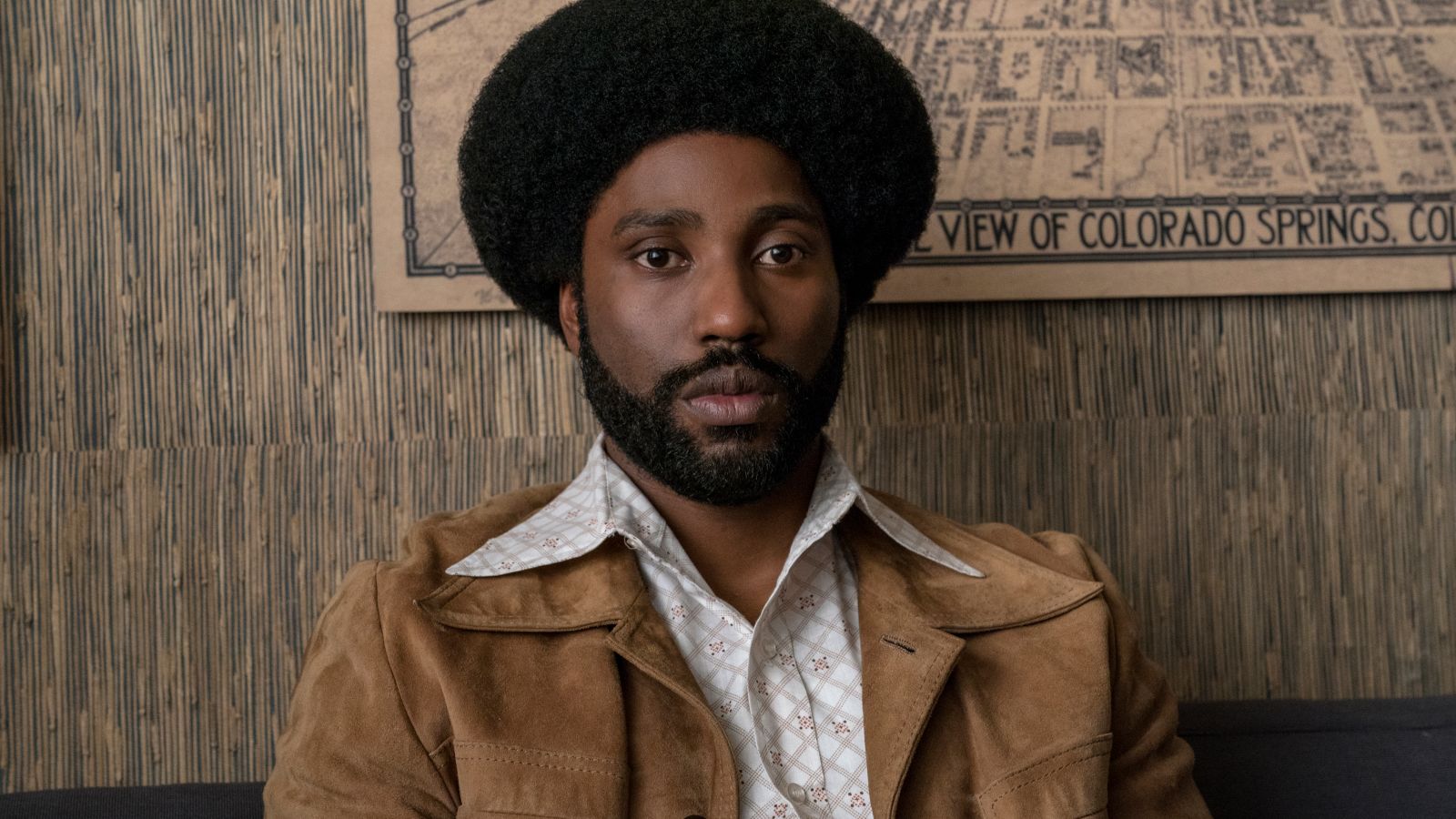 Based, as the opening credits pronounce, on “some fo real, fo real shit,” Spike Lee’s BlacKkKlansman is a riotous mess of contradictions: a true story that seems too outrageous to actually be true, a period piece that’s also a red-alert bulletin on current affairs, a very funny comedy about the very unfunny business of white supremacy. Dramatizing the exploits of a black cop who managed to bullshit his way into the Klu Klux Klan, Lee has, for the first time in forever, tapped right into the turbulent spirit of the cultural moment, making a rat-a-tat zeitgeist entertainment that feels as timely as breaking news. Yet he’s also made his most accessible and narratively satisfying movie in more than a decade, folding his righteous fury into a crowd-pleasing package with the help of producers Jordan Peele and Jason Blum, who lobbed their own charged cherry bomb, Get Out, into the multiplex last year.

BlacKkKlansman takes place in 1979, though the time period is never specified on screen, through dialogue or date stamps. It’s a pointed omission, a way for Lee to underline that the America he’s depicting— where white cops harass and murder black citizens, where white supremacists complain of their own supposed social disadvantage, where the ideological tendrils of hate groups extend into the political sphere—looks an awful lot like the America of here and now. Not that we can’t ballpark the year through context clues, like the ostentatious fashion choices, the warm hum of the Motown music cues, and the very 1979 afro sported by Ron Stallworth (John David Washington), the first black officer of the Colorado Springs Police Force, who successfully infiltrated a local arm of the KKK by masquerading as an aggrieved kindred spirit in the white power movement. (His memoir is the basis for the screenplay Lee cowrote with Charlie Wachtel, David Rabinowitz, and Kevin Willmott.)

“I’m fluent in both King’s English and jive,” Stallworth reassures his superiors, and that chameleonesque adaptability—coupled with his slightly nerdy nasal—comes in handy when the rookie cop answers, on a whim, a call for new members, making phone contact with “the organization.” Of course, joining the Klan requires meeting in person, which means that Stallworth needs a white face to go with the voice on the line, a Christian de Neuvillette to his bigot-whispering Cyrano de Bergerac. He finds him in Flip Zimmerman (Adam Driver), a Jewish narcotics officer with his own heritage to conceal from the marks. For months, the two insinuate themselves into the Klan’s ranks—a sting operation that Lee wrings for some suspense, as during a scene of Flip trying to fast-talk his way out of a lie-detector test, but also for plenty of belly laughs.

Ron gets close to the Klansmen by presenting himself as a sympathetic ear, flattering their intelligence while exploiting their lack of it; the joke, worthy of a Sacha Baron Cohen bit, is that the broader he gets with his parody of white victimhood, the more the cross-burners buy his act. Right from the jump, Lee gracefully walks the line between acknowledging the horrific history of the KKK and treating the Klansmen themselves as figures of ridicule. No stranger to playing bigoted blowhards, Alec Baldwin appears in the prologue as a right-wing propagandist, flubbing his lines during a bloviating pro-segregation pitch; he’s despicable, but also a moron. Later, when Stallworth’s deception ensnares the Grand Wizard himself, a young David Duke (Topher Grace), Lee is able to show how the Klan adapted to changing times, putting a polite face and a fancy suit on their message of hate. (We’re seeing, in some sense, the first storm clouds of our current political climate.) But the conversations between the two are basically uproarious crank calls on white supremacy itself, in part because Grace plays Duke as a clueless, milquetoast dork.

Washington, a former running back and a regular on HBO’s Ballers, shares a certain movie-star authority with his famous father, Denzel, who Lee cast as the titular civil rights icon of his last biopic, Malcolm X. But he has a quieter charisma, appropriate for a character constantly modulating his energy for different crowds. Most undercover cop movies are, in one way or another, about identity. The Departed, for example, turned its dueling-mole premise into a statement about class, about faking your way up or down the social ladder to fit in. BlacKkKlansman treats the espionage games of Stallworth’s scheme as a metaphor for the different masks he has to wear as a black man in America—how he plays a part not just for the KKK but also for his colleagues at the station, some of whom are only a pointy hood away from being unofficial Klansmen themselves. Lee, riffing on the tensions of white cop/black cop buddy comedies, recognizes the imbalance in the central relationship: “You’ve been passing as a WASP,” Ron reminds Flip, who can generally afford to ignore the intolerance he’s gone undercover to combat. (For whatever else it’s about, BlacKkKlansman exhibits an unexpected interest in Jewish American identity.)

There’s even an element of subterfuge to the film’s romantic subplot, as Ron hides his badge from Patrice (Spider-Man: Homecoming’s Laura Harrier), the college activist he meets while undercover at a black-student-union meeting. Lee, never afraid to stop his movie cold for some Greek chorusing, stages a fiery speech by one-time Black Panther Kwame Ture (Corey Hawkins) as a moment of political awakening: faces, isolated in close-up against a black backdrop, stirred by his call to action. But BlacKkKlansman is never cut-and-dried in its dialogue; it uses the lively, nuanced discussions between Ron and Patrice to ask big questions (“It’s a racist system,” she insists when he suggests that maybe black cops can make change from the inside), as well as to commune with the imagery and attitude of the era’s blaxploitation classics. Lee, as usual, has overstuffed his joint with ideas, genres, tones, and jukebox ear candy.

BlacKkKlansman isn’t, it must be said, among his absolute best. It lacks the sweltering power of Do The Right Thing, another state-of-the-divided-nation address delivered during the dog days of summer, or the sheer baptizing outrage of Bamboozled, one of the most caustically truthful (and underrated) films ever made about how deeply racism has burrowed under the skin of American culture. The storytelling can be uneven, especially in the final stretch, when Lee seems to run into the limitations of his real-life material. (No amount of wailing Terence Blanchard guitar can stop the climax from feeling, well, anti-climactic.) And there are times when the writer-director gets too on the nose with the already exceptionally apparent contemporary echoes, playing on MAGA and cracking a wink-wink gag about the country never being stupid enough to elect someone like David Duke to the presidency. Yet BlacKkKlansman, for all its indulgent… Spikiness, is held together by the force of Lee’s messaging. He’s the polemicist as insult comic, wedging truths between each karate chop to the (skin)head of racist America.

What this film understands is cinema’s capacity to speak to a mass audience, sympathetic to ideas and hungry for inspiration. It opens with a clip from Gone With The Wind, still the biggest hit of all time if you adjust for inflation, and a movie that continues to propagate a romantically distorted image of the slave-holding South. Later, it finds room for a scene of the Klansmen hooting and hollering through a screening of Birth Of A Nation, that monstrously racist proto-blockbuster, which helped revive the KKK and which—as Lee reminds us—President Woodrow Wilson reportedly described as “history written with lightning.” With BlacKkKlansman, Lee cooks up the counter-programming, his own brand of popcorn agitprop: brisk, fun, as aspirationally (and crucially) mainstream as the milestone movies it excerpts. He’s bottled plenty of his own lightning. And his penmanship hasn’t been this clear in ages.