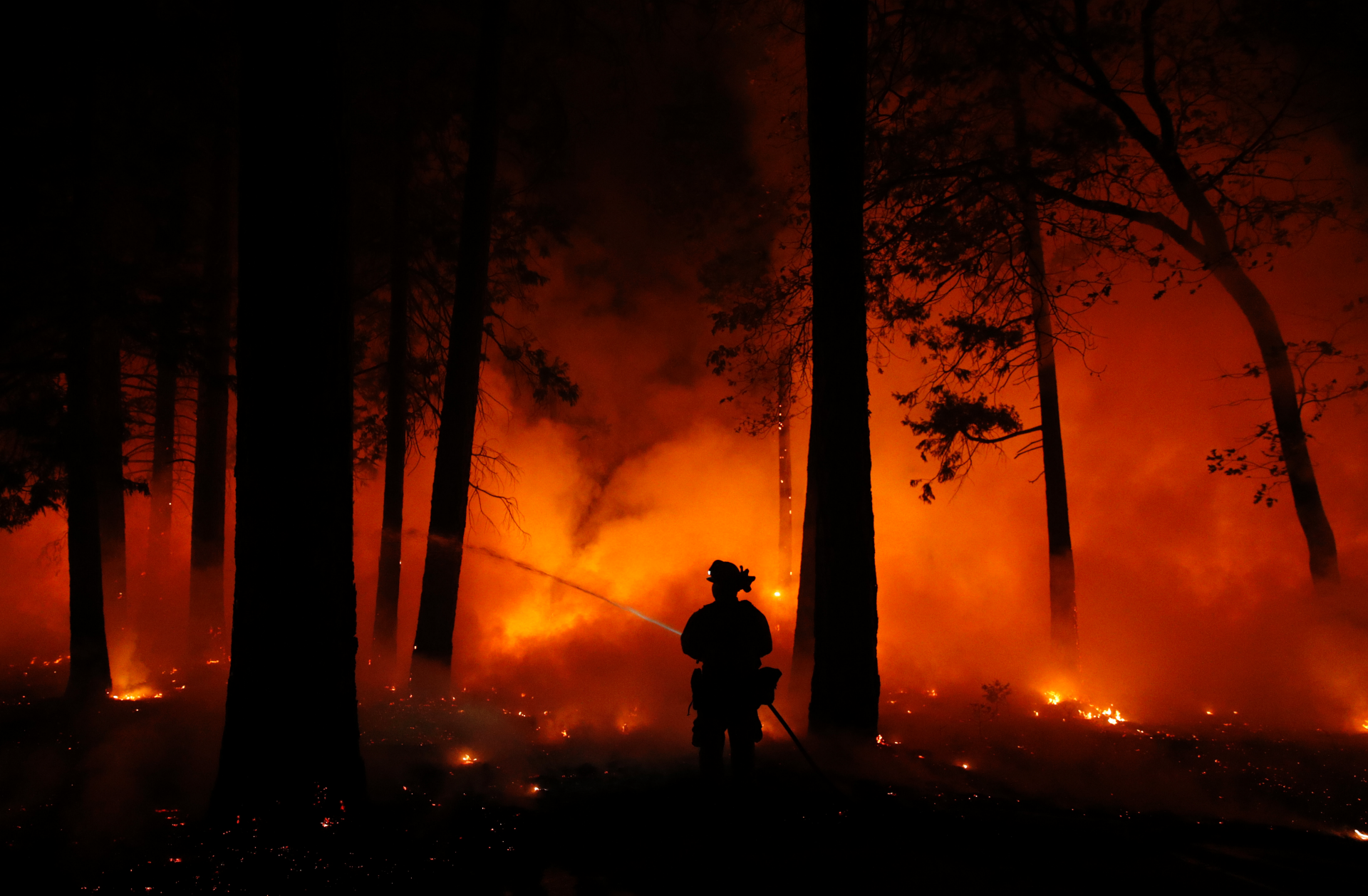 A firefighter sprays water on a controlled burn at a wildfire, Friday, Nov. 9, 2018, in Magalia, Calif. (AP Photo/John Locher)

PARADISE, Calif. – The Latest on California wildfires (all times local):

Authorities in Northern California have ordered residents to leave four small communities southeast of a town leveled by a deadly wildfire.

More than 50,000 people have been displaced by the blaze that has killed at least nine people and devastated the town of Paradise, where all 27,000 residents were ordered to evacuate.

Officials say better weather is helping them gain ground but they’re bracing for high winds that could spread the fire to other communities.

A farm owner says she stayed behind during evacuations for a raging wildfire in Northern California so she could try to save her 14 horses and other animals.

Cathy Fallon says she was able to save all her horses and her barn using a water hose. But two of her dogs and nine cats died in the fire that decimated the town of Paradise.

Fallon says her house burned down and her husband was hospitalized after fears he had a heart attack. She says he will be OK.

Fallon said she and her son, Gabriel, have been sleeping in a horse stall since the blaze swept through Paradise on Thursday.

A fire official says homes and other buildings in the town of Paradise are still burning and that crews are working to put out those blazes.

California Department of Forestry and Fire Protection Cpt. Scott McLean said Saturday a deadly wildfire is still burning in parts of Paradise and the nearby community of Magalia. The blaze has destroyed more than 6,400 homes and killed at least nine people.

He says heavy smoke hampered aircraft from dropping fire-suppressing liquid Friday but that thinning smoke will allow crews to battle the blaze from the air before winds pick up Saturday night.

McLean says more than 3,000 firefighters are making progress and more personnel is on the way.

A fire official says there have been significant losses from a pair of Southern California wildfires but thousands of homes have been saved.

Los Angeles County fire Chief Daryl Osby said Saturday that firefighters told him they were working in the toughest, most extreme conditions they had seen in their lives on Friday night.

He says conditions are far better Saturday, with a lull in winds that are expected to return Sunday.

Osby did not say how many homes have burned. Officials have said 150 homes had burned, and the number would rise.

The fire chief urged thousands of people ordered to evacuate to stay away from Malibu and other communities outside Los Angeles.

Authorities say two people have been found dead in the fire zone.

The “West Wing” actor was interviewed by Los Angeles Fox affiliate KTTV Friday night on the beach after evacuating from his nearby home. He says he expects his house has been destroyed and that he’s never seen a fire that has burned with such intensity.

The television station tracked down Sheen after son Charlie Sheen tweeted Friday night that he’d been unable to contact his parents. Martin Sheen gave a shoutout to his family to let them know he and his wife, Janet, were safe and planned to sleep in their car at the beach.

Officials say firefighters are fatigued but giving their all to get ahead of a deadly Northern California deadly blaze before winds pick up.

California Department of Forestry and Fire Protection operations section chief Josh Bischof told fire crews Saturday that they did great work Friday but “we need to button this down … (and) be ready for the wind shift tonight.”

The wind-whipped blaze that started Thursday incinerated most of Paradise, a town of 27,000 people, with flames that moved so fast that there was nothing firefighters could do.

Cal Fire Capt. Scott McLean said crews gave up attacking the flames and instead helped people get out alive.

More than 3,000 firefighters are battling the blaze that has killed at least nine people.

The deaths are the first from a pair of wildfires burning north and west of downtown Los Angeles that have torn through 109 square miles and destroyed more than 150 homes since Thursday.

Benedict gave no details on the deaths. He said Saturday sheriff’s detectives are investigating.

Wildfires burning across California have now killed 11 people. Nine have been found dead in fires in Northern California.

A wildfire in Southern California has more than doubled in size, and firefighters are searching through burned-out neighborhoods looking for new destruction from a blaze that has already destroyed 150 homes.

Officials took advantage of calm conditions Saturday morning to assess damage and get a new map of a blaze that has now burned 109 square miles (282 square kilometers) in the hills and canyons north and west of downtown Los Angeles.

Searches through cities including Thousand Oaks and Malibu are certain to find more damage, and the number of burned homes is expected to surge.

A smoky haze still is hanging in blue skies in the area Saturday, with the vicious winds that drove the flames in their first two days gone and expected to stay away until Sunday.

Firefighters are scrambling to take advantage of the better conditions to start reining in the blaze.

Officials say better weather is helping them gain ground against a deadly blaze that leveled a town in Northern California but they’re bracing for high winds that could threaten another community.

The California Department of Forestry and Fire Protection says strong winds are expected to return Saturday night and drive the blaze south across Lake Oroville, threatening Oroville, a town of 19,000 people.

National Weather Service meteorologist Alex Hoon says the area will see sustained winds of up to 30 miles per hour (48 kilometers per hour) with gusts up to 50 mph (80 kph).

The blaze that started Thursday outside the hilly town of Paradise has grown to 156 square miles (404 square kilometers). Officials say the town has been completely destroyed.

Officials say a deadly blaze that leveled a Northern California town has spread overnight but crews also got some control of the flames.

The California Department of Forestry and Fire Protection said Saturday that the wildfire grew to 156 square miles (404 square kilometers) but it’s 20 percent contained.

Cal Fire says the blaze that started Thursday in the hills near the town of Paradise destroyed 6,453 homes and 260 businesses. An additional 15,000 structures are threatened. At least nine people have died.

Officials say more than 3,000 firefighters are battling the blaze, which is California’s most destructive wildfire since record-keeping began.

President Donald Trump is threatening to withhold federal payments to California, claiming its forest management is “so poor.”

Trump says Saturday via Twitter that “there is no reason for these massive, deadly and costly fires in California.” Trump says “billions of dollars are given each year, with so many lives lost, all because of gross mismanagement of the forests. Remedy now, or no more Fed payments!”

The comments were Trump’s first about massive wildfires, including a blaze that incinerated most of the Northern California town of Paradise and killed at least nine people.

Wildfires also raged in Southern California, including the town of Thousand Oaks, where a gunman days earlier killed a dozen people at a local bar.