The new buzz in elephant conservation: a bee-scented repellent 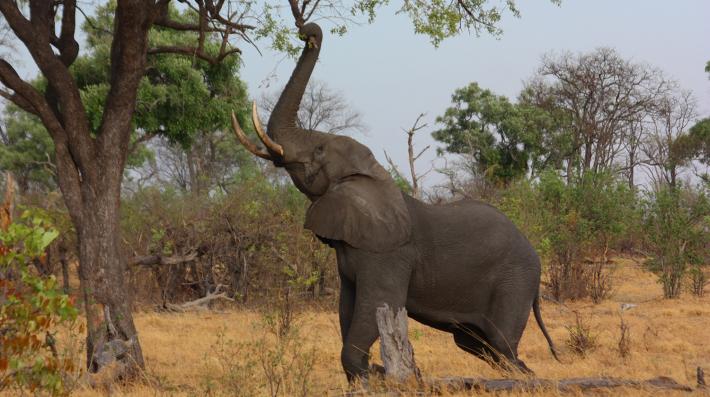 Elephants hate bees. This finding has prompted scientists to devise an experiment that could help reduce human-elephant conflict.

As the saying goes, “elephants never forget”. They certainly don’t forget how painful it is to be stung around the eyes or mouth by a swarm of bees. Over millions of years, they have learned to recognize their smell, and when they do, they move away.

Now scientists have developed an organic formulation containing honeybee pheromones that has been found to safely repel elephants. This technique has the potential to help prevent human-elephant conflict and the damage they inflict on crops when they encroach on human settlements, according to a recent study published in Current Biology and conducted at Greater Kruger National Park in South Africa between December 2017 and February 2018.

The scientists placed a blend of pheromones that bees release when they perceive danger around waterholes frequented by African bush elephants. According to observations, most of the elephants that came near the formulation showed typical signs of increased alertness, signs of uncertainty, and finally calmly moved away, while those approaching control treatments were eager to investigate the foreign object in their environment.

It has long been known that active bee hives placed around crops deter elephants. This study holds out the possibility that synthetic pheromones can be used to reduce human-elephant conflict at a wider scale.

“This new technique could eventually be useful for keeping elephants at bay in areas where humans and elephants have come into conflict, but its long-term effectiveness needs to be demonstrated first,” says UN Environment Wildlife Expert Julian Blanc.

“For instance, it needs to be shown that elephants do not become habituated to the pheromones over time, and that the product does not cause any unintended consequences for already embattled elephants or honey bee populations.

“Even then, it is only likely to be effective if employed as part of a holistic approach that includes preventive interventions like land-use planning and other mitigation tools. The product would also need to be made affordable to rural farmers, and they would need to be trained on its appropriate application.”

The need for safe elephant management strategies has become more pressing as human populations have grown in Africa and Asia, creating areas where elephants conflict with humans by destroying crops or causing other damage. People have been trampled to death, and their crops destroyed. Elephants deemed to be destructive are often killed.

Human-elephant conflict is just one of the many threats to elephants. Habitat loss, the ongoing illegal international trade in ivory, weak governance, poverty that drives poaching, and human ignorance, greed or apathy are some of the challenges of elephant conservation.

World Elephant Day, on 12 August, is an annual awareness campaign that began in 2012 and was created by documentary filmmaker Patricia Sims and her colleagues. UN Environment’s Wild for Life campaign also raises awareness of the need for elephant conservation.