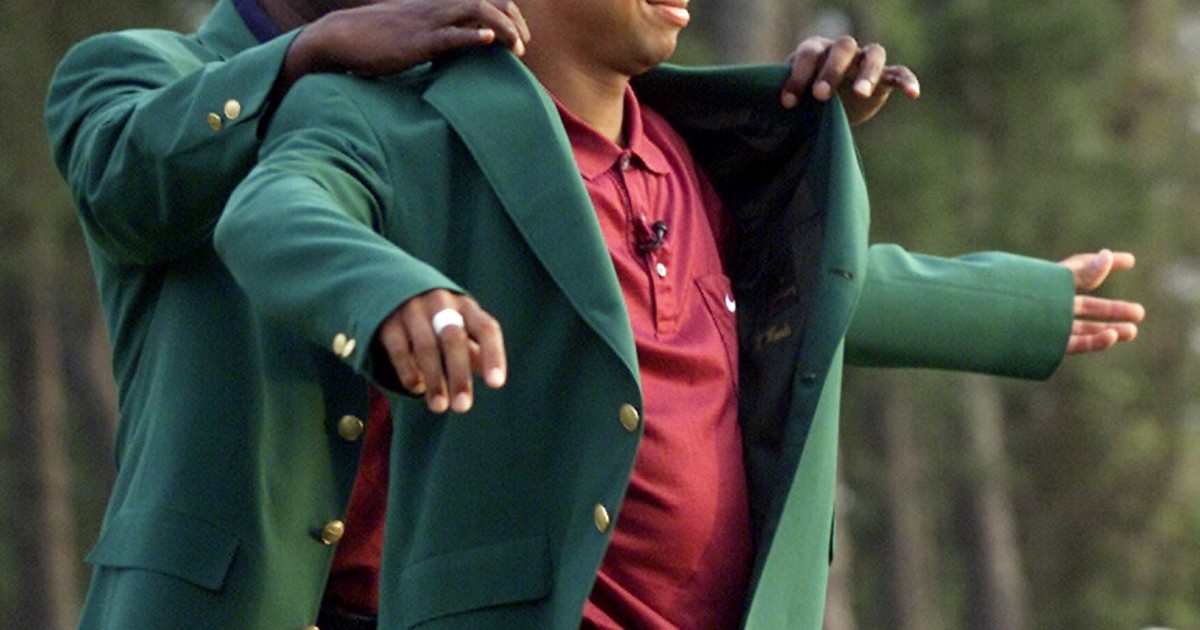 At the Masters on this date in 2001, Tiger Woods, 25, completed the “Tiger Slam” with a two-shot victory over runner-up David Duval. A final-round score of 66 at Augusta National gave him a four-round total of 272 (16 under par) and titles in four consecutive majors.

A crowd of 53,775, the largest in Atlanta-Fulton County Stadium history, saw Henry Aaron pass Babe Ruth on the all-time home run list in 1974 when he hit his 715th in the fourth inning off Dodgers left-hander Al Downing.

The Lakers have had 15 games postponed because of the COVID-19 pandemic, the latest Wednesday night against the Chicago Bulls at Staples Center. The Lakers won 118-112 on Nov. 5 in Chicago.

Here is a look at memorable games and outstanding sports performances on this date:

1935 — In a steady rain, Gene Sarazen crushes a four-wood, known then as a “spoon,” from 235 yards away and gets a double eagle on the par-five 15th hole at Augusta National to erase Craig Wood’s three-stroke lead. Sportswriter Grantland Rice calls it the “shot heard ’round the world” and Sarazen goes on to win the Masters.

1943 —The Detroit Red Wings beat the Boston Bruins 2-0 to win the Stanley Cup in a four-game sweep. Boston scores only five goals in the series while Detroit has 16.

1975 — Frank Robinson, the first black manager in baseball, debuts as player-manager for the Cleveland Indians. Batting second as the designated hitter, Robinson hits a home run in his first at-bat off Doc Medich to lead the Indians past the New York Yankees 5-3.

1990 — Nick Faldo is the second golfer to win consecutive Masters championships, beating Ray Floyd, who hits a seven-iron into a pond on the second playoff hole at Augusta National. Faldo joins Jack Nicklaus as the only repeat winner and it is his third of six major titles.

2007 — Sidney Crosby of the Pittsburgh Penguins finishes the season with 120 points to become the youngest player to win the Art Ross Trophy for most points. Crosby, 19, improves the mark set by Wayne Gretzky, who was 20 when he had 164 points in 1980-81. Crosby has 36 goals and 84 assists and is named captain, the first for the Penguins since the retirement of Mario Lemieux.

2008 — Candace Parker, playing with an injured left shoulder, scores 17 points and grabs nine rebounds to help Tennessee win its eighth women’s NCAA championship with a 64-48 victory over Stanford. The Lady Vols are the first repeat champions since Connecticut’s three straight titles from 2002 to 2004.

2013 — Luke Hancock comes off the bench to make all five of his three-point shots and lead Louisville to its first NCAA championship since 1986 with an 82-76 win over Michigan at the Georgia Dome in Atlanta. Rick Pitino becomes the first coach to win a championship at two schools, following his title at Kentucky in 1996.

DAYTONA BEACH, Fla. (AP) — NASCAR has renamed the trophy for its annual champion to