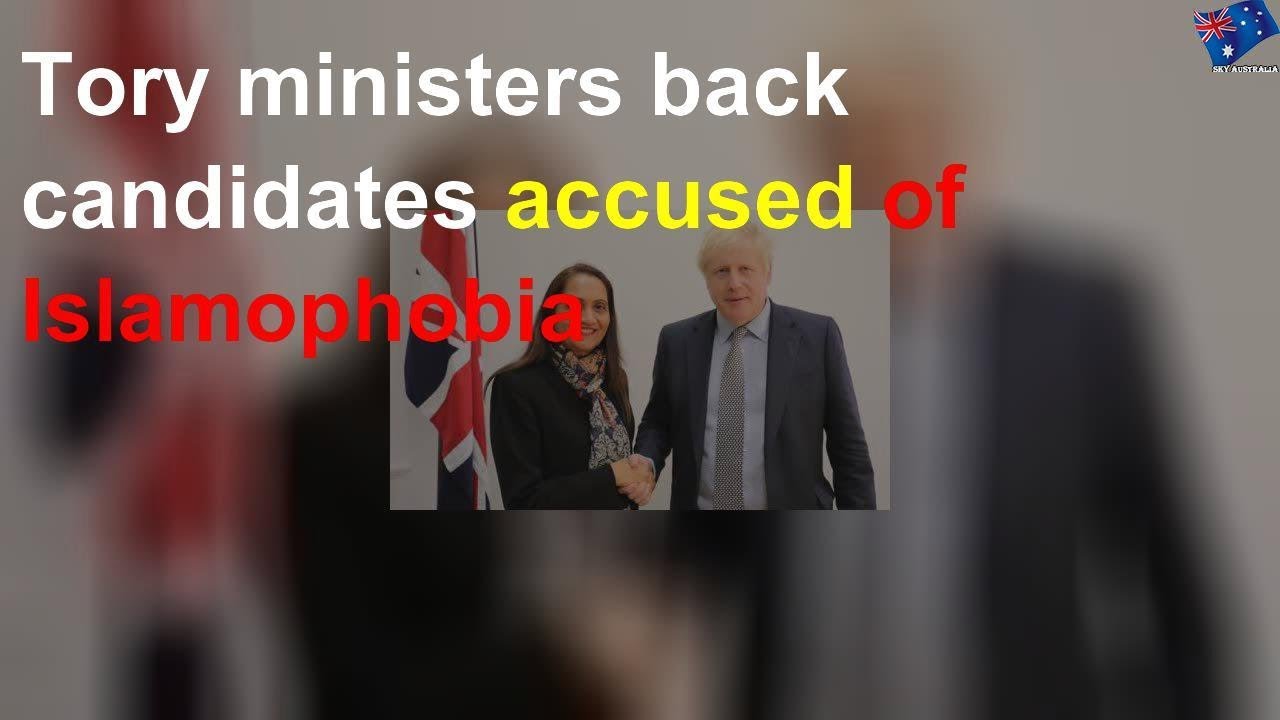 At least four ministers have gone on election campaigning trips to endorse Tory candidates facing allegations of Islamophobia since the claims against them came to light, the Guardian has learned.

In constituency visits that appear to contradict Boris Johnson’s repeated claim that the party has a “zero tolerance” stance on the issue, Sajid Javid, Matt Hancock, Andrea Leadsom and Thérèse Coffey have thrown their weight behind the accused candidates – all of whom are fighting in key marginal battlegrounds.

Incidents include one candidate who argued that Muslims have divided loyalties, as well as blaming immigrants for bringing HIV to Britain, and another who retweeted posts from former English Defence League leader Tommy Robinson.

Johnson himself has also posed shaking hands with a Conservative candidate accused of sending an anti-Muslim tweet to Nobel Peace prize winner, Malala Yousafzai, 22. It is understood the photograph was taken after the party became aware of the tweet.

The disclosures came as the Tories face increasing pressure over Islamophobia following a slew of revelations, with the Equality and Human Rights Commission considering whether to launch a formal investigation into the party.

Johnson, who apologised on Thursday for previously describing women wearing face-covering veil as looking like “letterboxes”, has pledged to hold an inquiry into all forms of discrimination, including Islamophobia, before the end of the year.

Lady Sayeeda Warsi, former Conservative chair and the country’s first female Muslim cabinet minister, said: “There is a gulf between the rhetoric of tackling Islamophobia in my party and my party actually tackling it. Time and time again we see those accused of anti-Muslim racism face no penalty and no consequence.

“They continue to be embraced by the party leadership and this sends a clear message that there is a culture of impunity on the issue of Islamophobia in the Conservative party.”

Nick Lowles, chief executive of anti-racism charity Hope Not Hate, said: “For Conservative Cabinet members to be campaigning openly for candidates who are facing serious accusations of anti-Muslim prejudice is nothing short of hypocrisy after Boris Johnson promised a ‘zero tolerance’ approach to Islamophobia.

“There is no question that many of the individuals concerned should have been suspended and no responsible politician should be helping them into parliament – they should be doing the opposite and stopping them.”

Despite repeated promises from senior figures that the party will not brush allegations of Islamophobia under the carpet, ministers have continued to allow their endorsements to appear in accused candidates’ campaigns. This week, Andrea Leadsom, the secretary of state for business, energy and industrial strategy, paid a visit to the party’s candidate in Lincoln, Karl McCartney – who was recently exposed by Hope Not Hate for retweeting posts from Tommy Robinson.

As well as posts from Robinson, McCartney shared others from controversial commentator Katie Hopkins over a sustained period. The posts, the campaign group said, contained “anti-Muslim and anti-Semitic material”. McCartney – who is fighting to overturn a 1,500 Labour majority seat – was forced to apologise.

Despite the disclosures, work and pensions secretary Coffey also endorsed him during a visit to Lincoln this month, saying: “I think Karl is a man who’s committed to being a person who’s a great champion for the city.” A few days before the Robinson and Hopkins retweets came to light, home secretary Priti Patel had visited McCartney, describing him as a “local champion”.

Meanwhile, chancellor Javid joined activists last month out campaigning for Bob Blackman, who has repeatedly been accused of Islamophobia and is defending a slim majority of fewer than 2,000 in Harrow East, north London.

Last year, Blackman posted an article on Facebook headlined: “Muslim Somali sex gang say raping white British children ‘part of their culture’.” Though he deleted the post, saying he regretted “any upset” caused, it is not the first time he has been in hot water over the issue. In 2017, Blackman sparked outrage when he hosted Tapan Ghosh, an anti-Islamic extremist who once praised the persecution of Rohingya Muslims in Myanmar, as a keynote speaker in parliament. At the time Blackman said that “the choice of speakers and the views expressed are entirely the NCHT’s [National Council of Hindu Temples]”.

Health secretary Hancock visited Anthony Browne, the Tory candidate in South Cambridgeshire, despite him facing calls to be removed after being accused of “disgusting racism” over his writings.

Though the Tories hold a comfortable majority, Browne’s bid to become MP is under threat from surging Liberal Democrat support with one poll last month showing the party ahead.

Browne made comments blaming immigrants for bringing germs and HIV to the UK and accused Muslims of having divided loyalties. He wrote in The Spectator in 2003: “It is not through letting in terrorists that the government’s policy of mass migration – especially from the third world – will claim the most lives. It is through letting in too many germs.”

Separately, his 2002 book Do We Need Mass Immigration? includes a passage about Muslim leaders warning the Iraq war could cause social unrest. He wrote: “Whatever the merits or demerits of war on Iraq, it is hardly a national strength to have a large minority with such divided loyalties during war.” Browne has since apologised.

But weeks after his comments surfaced, Browne posted a video of Hancock posing with him, boasting that he has known him for 15 years. In the video, Hancock praises Browne for being “a great champion for the NHS” and says he thinks he will be a “brilliant” MP.

Meanwhile, Johnson posed for a picture shaking hands with Brent North Tory candidate, Anjana Patel, who has been allowed to stand for the party despite Conservative HQ knowing she had sent an anti-Muslim tweet. The picture was posted by Patel on Facebook on 12 November. It is understood the picture was taken after the party became aware of the Islamophobia allegations against her.

On 15 November, LBC reported how Patel’s name was among a dossier of 10 Tory councillors who had made or shared Islamophobic material. Patel sent an angry tweet to lauded Pakistani activist Yousafzai saying: “Two Hindu girls were kidnapped from their home, were molested and forcefully converted to your religion, Islam. The world should know about this barbaric act by Islamists. Don’t block me. How are you going to help?” She tagged the Indian prime minister Narendra Modi. The Conservatives responded saying the party was already aware of cases including Patel’s and “concluded the relevant investigations”.

Separately, two Conservative candidates in Scotland have been suspended by the party after being exposed over claims of Islamophobia and racism.

It has also faced repeated allegations against local councillors and campaigners. Last month the Guardian revealed that 25 sitting and former Conservative councillors had posted Islamophobic or racist material on social media, leading to the suspension of all of the sitting councillors from the party.

More recently Faiza Shaheen, the Labour candidate for Chingford and Woodford Green, accused John Moss, a member of her opponent Iain Duncan Smith’s campaign team, of Islamophobia after he failed to apologise to the local mosque over a series of posts that led to his suspension from the party last year.

The Conservatives declined to answer a series of questions from the Guardian, releasing a statement saying: “Our manifesto has committed to ensuring everyone’s rights are respected and everyone is treated with fairness and dignity.

“Discrimination or abuse of any kind is wrong, and the Conservative party takes decisive action to deal with any incidents of hatred, abuse or intimidation.

“Our complaints process is rightly a confidential one but there are a wide range of sanctions to challenge and change behaviour, including conditions to undertake training, periods of suspension and expulsion, and these are applied on a case-by-case basis.”