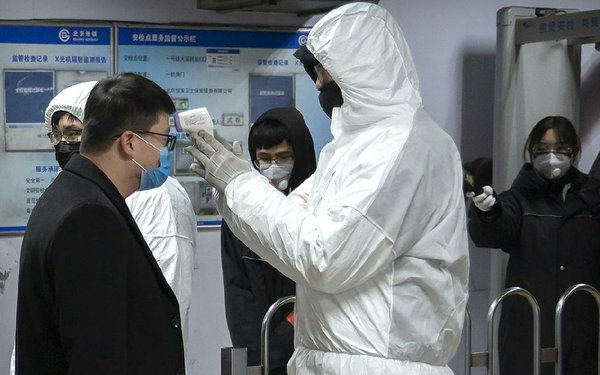 BEIJING — Chinese authorities announced a temporary ban on the trade of wild animals Sunday after a viral outbreak in Wuhan, saying they will “severely investigate and punish” violators.

Local authorities will “strengthen inspections and severely investigate and punish those who are found in violation of the provisions of this announcement,” read the ban issued by three government agencies.

No wildlife can be transported or sold in any markets or online, according to text of the announcement in state media. Suspected violators will be sent to security services, and their properties will be closed and sealed. Legal breeding centers will be quarantined.

The ban will continue until “the epidemic situation is lifted nationwide,” in order to prevent the spread of the new coronavirus and block potential sources of infection and transmission.

China’s government said today that it is extending its Lunar New Year holiday by three more days to discourage people from traveling.

Tens of millions of Chinese who visited their hometowns or tourist spots were due to return home this week, raising the risk the virus might spread in crowded trains and planes.

The official end of the holiday will be pushed back from Friday to Sunday to “effectively reduce mass gatherings” and “block the spread of the epidemic,” a Cabinet statement said.

Three agencies have opened a hotline where people can report wildlife violations, and they called on the public to refrain from eating wild animal meat. The agencies are the State Administration of Market Regulation, Ministry of Agricultural and Rural Affairs and the National Forestry and Grassland Administration.

“Consumers should fully understand the health risks of eating wild animals, stay away from ‘game’ and eat healthily,” said the regulations.

But the regulations will remain in place only while China grapples with the epidemic, raising the question of whether the wildlife trade will be allowed to bounce back, as it did after an initial clampdown after the SARS outbreak.

Christian Walzer, chief global veterinarian at the Wildlife Conservation Society, called the measure an “important first step” but said the ban needs to be permanent.

“The pattern will keep repeating itself until we ban, not only in China, but in other countries, the sale of wildlife, specifically for food and in food markets,” he said in a statement.

The wildlife ban comes as the new virus accelerated its spread in China with 80 deaths, and 2,744 infections. China cut off trains, planes and other links to Wuhan on Wednesday, as well as public transportation within the city, and has steadily expanded a lockdown to 16 surrounding cities with a combined population of more than 50 million — greater than that of New York, London, Paris and Moscow combined.

Demand for wild animals in Asia, especially China, is hastening the extinction of many species, on top of posing a perennial health threat that authorities have failed to fully address despite growing risks of a global pandemic.

Peter Knights, founder of WildAid, said the current crisis might have been averted if the ban after SARS had been permanent. “Surely it’s time for an advanced country like China to reassess the viability of a tiny industry that risks global pandemic, national image, animal cruelty and conservation concerns,” he said.

In an earlier response to the crisis in Wuhan, China’s Agriculture Ministry issued an order for tightened controls on trade in wildlife.

A group of 19 prominent researchers from the Chinese Academy of Sciences, the Wuhan Institute of Virology and the nation’s top universities had called for the government in China to crack down on wildlife markets such as the one at the center of the Wuhan outbreak.

Illegal trade flourishes in “loopholes” of the legal wildlife trade in China and increases the probability of an outbreak, the group wrote in an open letter posted on Weibo. “This is the hidden danger for the trade and consumption” of wild animals, the letter read. They advocate vastly increasing on-site inspections and government oversight of all wildlife markets.

Zoonotic diseases, or those contracted by humans that originated in other species, account for a large share of human infectious illnesses. Not all of them come from the wildlife trade: rabies is endemic across many species and one of the biggest causes of death in the developing world. But mixing species of wild animals increases the risk of diseases mutating and growing more virulent as they spread in unregulated markets, experts say.

The emergence of such diseases is a “numbers game,” Walzer said.

“If these markets persist, and human consumption of illegal and unregulated wildlife persists, then the public will continue to face heightened risks from emerging new viruses, potentially more lethal and the source of future pandemic spread,” he said. “These are perfect laboratories for creating opportunities for these viruses to emerge.”

Researchers have not yet announced a definitive source for this latest outbreak, which like many other viruses can infect multiple species.

One of the first measures taken by Wuhan authorities was to close down the Huanan Seafood Wholesale Market, where 41 of the first cases originated.

The city government closed the seafood market at the beginning of January after many of the first cases of coronavirus emerged in people working there.

He was in China after the 2002-2003 outbreak of SARS, or Severe Acute Respiratory Syndrome, which was traced to consumption of wild animals in the southern city of Guangzhou. Epstein helped the ongoing global effort over nearly two decades to find the wild source of that virus, which sickened more than 8,000 people and killed less than 800. SARS has been linked to various animals, including bats and the civets.

Bats are known to harbor coronaviruses, but scientists have yet to fully understand the new virus and how it leapt from animals to people.

Epstein said researchers suspect but haven’t proved that the Wuhan virus came from bats. Before it infected humans, it likely first jumped to an as yet unidentified mammal.

The crackdown on wildlife trafficking and sales persisted only about six months after the SARS outbreak faded in mid-2003, Walzer said.

But in provincial cities and in some parts of Cambodia, Laos, Vietnam and other Southeast Asian countries, those determined to eat such exotic dishes can find all sorts of creatures for sale: pangolins, badgers, salamanders, scorpions, hedgehogs and even wolf puppies.

China remains a major consumer of wild and endangered animals for meat, as well as for traditional medicine. But medical and wildlife experts hope this epidemic will help to change attitudes.

“It rankles that some people out there are obsessed about game meat and eat to their heart’s content because of gluttony and greed,” it said. “They harvested this evil fruit, making a whole city, a whole country, and even the entire human race pay such a heavy price; and the worst is yet to come.”

The strongly worded piece asked whether those “who love to eat, poach, and trade wild animals have been shaken by this, are feeling the least guilty conscience, or have confessed to their wrongdoing deep down,” and lamented that the illegal trade in wild animals was not closed after SARS.

“Some people are still taking chances and opening the Pandora’s box again and again,” it added. “How can we be so forgetful?”

Court records show that authorities in Hubei, the province where Wuhan is located, investigated 250 cases related to wildlife trafficking and poaching in 2019. According to local media reports, since 2018 an estimated 16,000 wild animals were hunted in the province of more than 60 million people.

Hubei is home to Shennongjia, a UNESCO World Heritage nature reserve that is a habitat of great biodiversity with many rare species including the clouded leopard, golden snub-nosed monkey and the Chinese giant salamander.

In most cases, vendors are registered to sell some unprotected species, usually a limited amount of just a few, such as hares, wild boar and muntjac, a kind of tiny deer.

But enforcement is “not that strict,” said Tian Jiang Ming of the Anti-Poaching Squad, a group of volunteers who visit markets are report on illegal wildlife sales. The illegal offerings tend to be kept hidden away in back freezers, he said.

Only in 2014 did China criminalize consumption of protected species with a law specifying a maximum three-year jail term. But it also has allowed commercial farming of certain species, including tigers — a practice that conservation advocates say encourages illicit trafficking in protected species.

Information for this article was contributed by Sam McNeil, Penny Yi Wang and Elaine Kurtenbach of The Associated Press; and Simon Denyer and Lyric Li of The Washington Post. 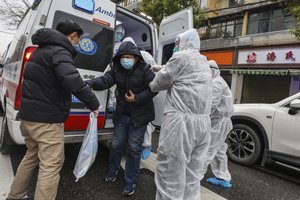 AP
Medical workers in protective gear help a patient out of an ambulance Sunday in Wuhan, China, the city where the coronavirus first appeared. 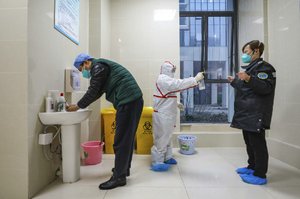 AP
A worker disinfects a member of an ambulance crew Sunday in Wuhan, China. A lockdown on Wuhan has expanded to 16 surrounding cities.