Will the Man in the Funny Hat Replace Angela Merkel? 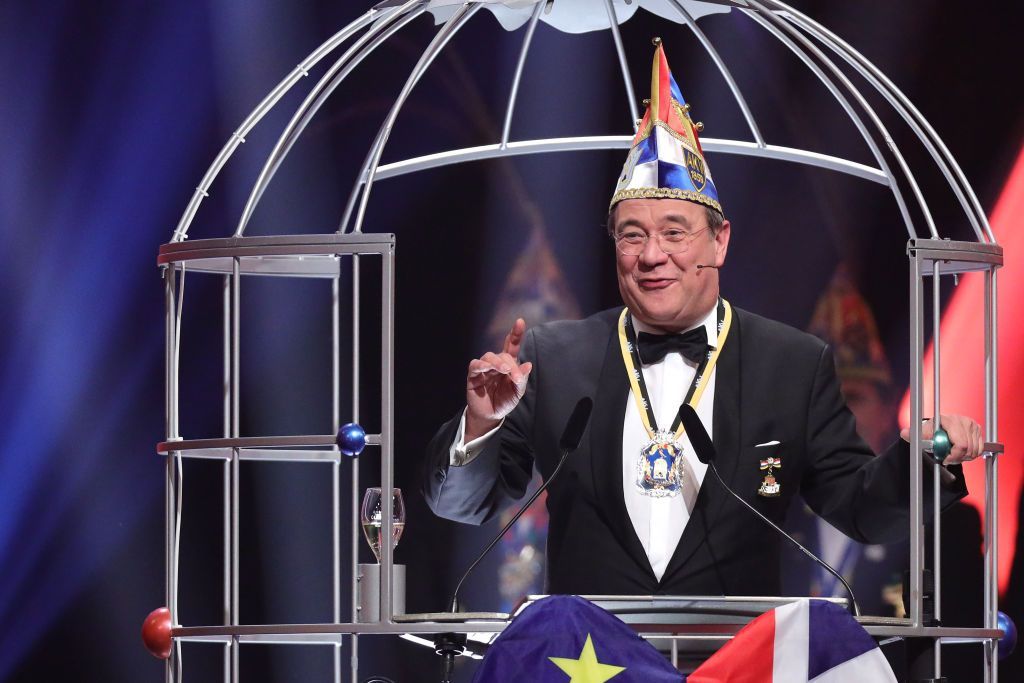 (Bloomberg Opinion) — Just the other day, Armin Laschet, the premier of North Rhine-Westphalia, stood in a cage on a podium in his native Aachen, wearing a funny hat and doing his best to be, you know, hilarious. That’s one of his roles in German politics. It was also his job that day, because he was receiving an award for levity (yes, there’s such a thing). It helped that this is Germany, where the bar for humor is low; that the atmosphere was typical of the Rhine regions, and thus jovial and boozy; and that a percussion band marked his punchlines with eardrum-bursting blasts, lest the audience miss their cues to laugh.

Could this be Germany’s next chancellor? According to one scenario, he might be, especially if there’s any basis to rumors of a possible backroom deal to clarify the country’s leadership succession.

Germany’s been in turmoil since Feb. 10, when the former heir apparent to succeed Angela Merkel as chancellor, Annegret Kramp-Karrenbauer, announced that she would not be a candidate, and would also stand down as boss of the center-right Christian Democratic Union (CDU), to which both women and Laschet belong. AKK, as she’s known, added that she’d like to stay on as defense minister, but would concentrate on facilitating an orderly handover to the eventual party leader and candidate, to be decided at a conference in December.

Within a day, however, a consensus emerged in Berlin that this slow timetable just won’t work. The world is too unstable, and its economy, buffeted by trade wars and a coronavirus, is too fragile for the European Union’s largest country to take a year-long policy sabbatical. Within the EU, Germany is due to take over the rotating presidency of the Council of Ministers this summer, just as controversies loom about the bloc’s budget, its enlargement to the Balkans, and much else.

So a faster transition is necessary. And yet, it’s also clear that the choice of the CDU’s next leader must coincide with a potentially wrenching debate about the party’s future direction, after 20 years of Merkel leading it, 14 of those as chancellor. In particular, the party must clarify how centrist or conservative it wants to be, and how it will deal with the far-right Alternative for Germany (AfD). After all, it was the AfD that — with a cynical maneuver in a regional parliament on Feb. 5 — sparked this whole crisis.

One man who would represent a clear break with Merkel’s legacy is Friedrich Merz, 64. He was a leading conservative politician in the 1990s until he was ousted as the CDU’s parliamentary leader in 2002, by none other than Merkel. Ever since, the two have hated each other. Ideologically, Merz stands against Merkel’s woolly centrism. He believes that confrontation is good for democracy. He’s unapologetically pro-business, and used to be famous for demanding a tax reform so radical that Germans would be able to fit their entire returns on the back of a beer coaster.

Because Merz is so conservative, on migration and much else, he’s said to be the Christian Democrat the AfD fears most, since he might attract some of its voters back to the center. (Like the other candidates, Merz has ruled out ever cooperating with the AfD). Merz’s weakness is that he’s been out of politics for years; he’s already been labelled a “zombie” by detractors. Moreover, during his time away he made bags of money running the German arm of BlackRock Inc. Being rich and a private-equity guy is a liability in German politics.

Another man who would make a clean separation from Merkelism is Jens Spahn, 39. He’s been impressing Germans with his legislative zeal as health minister. Like Merz, he’s also considered an arch-conservative, with the twist that he can simultaneously appear woke because he’s gay. If Spahn became the winner, he would continue a trend of youngish, male and rather brash leaders in Europe, as in neighboring Austria or France.

Then there’s the wild card, Markus Soeder (53). He’s premier of Bavaria and leader of the CDU’s “sister party,” the CSU. By tradition, the two Christian Union parties nominate a joint candidate for chancellor and form one group in the federal parliament. So he’ll have to sign off on the nominee. Indeed, he could even become that nominee, if he sees no clear winner emerging in his sister party.

Currently, though, Laschet seems to have decent odds, after a clever charm offensive. Laschet, Merz and Spahn are all from North Rhine-Westphalia, the region with the largest population and the biggest CDU delegation, which Laschet runs. In return for support, he appears to have offered Merz (who has also signaled his interest in Merkel’s job) either the finance or the economics ministry in a Laschet cabinet. Spahn could become the bloc’s parliamentary leader, a top job that’s also a launching board for the chancellorship. Soeder could stay on his Bavarian throne but get better cabinet positions for the CSU in Berlin.

A Chancellor Laschet would represent the least abrupt break with Merkelism. By temperament, as displayed on that Aachen stage, he wants to motivate, mediate, de-escalate. He’s currently governing with the pro-business Free Democrats in his state, but is also friendly with the Greens, who would probably be the CDU’s kingmakers. In talk-shows, where Laschet’s a perennial guest, he’s masterful at saying nothing substantive and offending nobody.

Because Laschet gets along with Merkel, the two could coexist during an awkward transition period, as he leads the party and the campaign and she runs the chancellery. Then again, one lesson AKK drew this week as she was resigning is that those functions should never be separated again, for they weaken the candidate. So any successor might insist that Merkel leaves earlier, perhaps even this year. That may trigger snap elections, and immediately kick off the campaign. Good thing Laschet’s been brushing up on his jokes.

To contact the author of this story: Andreas Kluth at [email protected]

To contact the editor responsible for this story: James Boxell at [email protected]

This column does not necessarily reflect the opinion of Bloomberg LP and its owners.

Andreas Kluth is a member of Bloomberg’s editorial board. He was previously editor in chief of Handelsblatt Global and a writer for the Economist.

For more articles like this, please visit us at bloomberg.com/opinion

Subscribe now to stay ahead with the most trusted business news source.