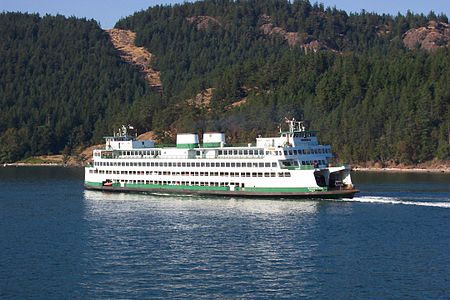 On the final Saturday night of last year’s San Juan County Fair, there was a problem at Washington State Ferries Friday Harbor terminal. An unusually high  number of vehicles with livestock had shown up  for the evening’s final interisland sailing. This lead to some passengers not making it home that night. Even though vehicles with livestock are given priority loading, WSF simply didn’t have the space to accommodate everyone on the regular Saturday night sailings. In the past, most fair participants with livestock had stayed until Sunday morning. As a result of the mishap, WSF investigated what happened, talked with people who had been on the sailing (or had tried to be on it), and promised to do better this year.

According to WSF Government Relations Director John B. Vezina, WSF has had multiple conversations during the past few weeks with the Fair’s staff, who have been terrific in asking livestock presenters when they plan to travel home and the length of their vehicles. Based on that data, WSF has developed the following plan for Saturday night, August 17, 2019:

· The Kaleetan’s 10 pm. sailing from Friday Harbor, which usually takes vehicles traveling to Orcas, Shaw, Lopez, and Anacortes, will instead load all customers except those going to Lopez. While it won’t be dropping vehicles off at Lopez, the vessel will stop there, picking up customers going from Lopez to Anacortes.

· The Samish, which usually ends its service day at Orcas at 10.30 pm, before going to Anacortes without customers, will instead go to Friday Harbor from Orcas, arriving about 11.10 pm. It will pick up customers traveling to Lopez and also any Anacortes customers who didn’t take the Kaleetan’s 10 p.m. sailing.

This should clear everyone from Friday Harbor, ensuring vendors who want to leave before the fair’s official vendor sign out on Sunday, are able to do so.

Please note: Customers will not be able to make reservations for the Samish’s 11.10 pm. trip from Friday Harbor to Lopez/Anacortes as it will be focused on getting livestock and other vendors home from the Fair. WSF Customer Service and Communications Departments will send out alerts about the last two sailings, letting customers know vehicles with livestock will have priority and “tall” vehicles not transporting livestock may want to take early sailings to ensure they get on a vessel on Saturday.