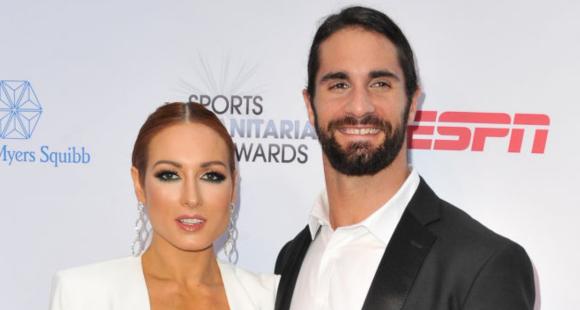 Seth Rollins got candid about his relationship with Becky Lynch and how he learns a lot from her, from a performer’s perspective. The WWE superstar also finds it funny that people think Brollins has no chemistry. Read below to know more about what Seth had to say about Becky.

If you are a part of the WWE Universe, all anyone is talking about is Seth Rollins and Becky Lynch’s relationship. That’s right! Brollins has been on everyone’s minds! While some are rooting for the couple, there are those who feel that the pair is being thrust upon them and are questioning their motives for making their real-life relationship into a WWE storyline. In several interviews and social media posts, Seth and Becky have addressed the hate they are getting for their chemistry and in an interview with TampaBay, Rollins confessed that he found it funny when people suggested that Brollins lacks chemistry.

“I think those critics might be a little jealous,” Seth shared while reasoning that if a fan crushes on Lynch, they would not be fond of the guy who is actually dating her. “We have such great chemistry I think it’s funny that people think we don’t. Either way, it amuses me,” Rollins added. Furthermore, the former Universal Champion shared that the couple spends all their time together. Complimenting his girlfriend, Seth called Becky “awesome” and “super talented”. The wrestler also revealed that he learns a lot from Lynch in the ring and while watching her cut WWE promos, Rollins finds her to be an inspiration.

“Just from a performer’s perspective, I get a lot out being near her on-screen and off-screen I get a lot as well, so it works out in both places,” Seth added.

What do you think of Brollins’ chemistry? Let us know your views in the comments section below.

ALSO READ: Becky Lynch and Seth Rollins show off their chemistry in this loved up photo as a message to the haters

Meanwhile, Rollins will be seeking revenge from Brock Lesnar at Summerslam 2019 and try to win back the Universal Championship while The Man will be putting her RAW Women’s Championship on the line against Natalya.