Your Must See Sports Headlines for Today, August 9 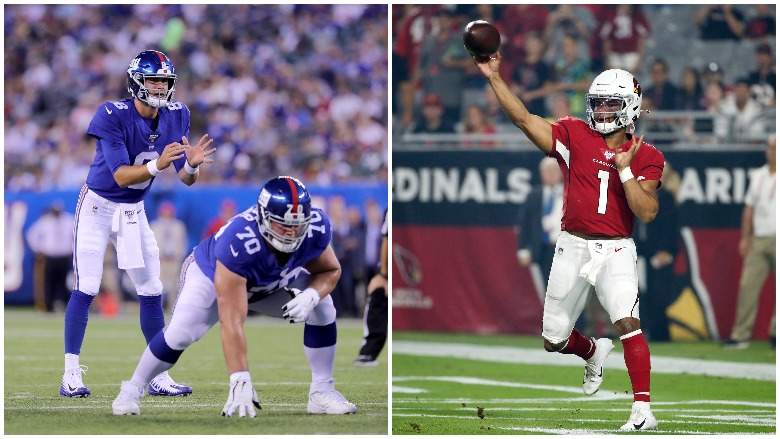 
Collection of photos via Getty Images

Welcome to the roundup of must-see sports news from Thursday, highlighted by rookie quarterbacks Daniel Jones and Kyler Murray making impressive debuts during the first full night of NFL Preseason Football and the White Sox and Yankees scheduled to play at the “Field of Dreams.”

All this and more as we get you up to speed with the sports world on this summer Friday!

Collection of photos via Getty ImagesDaniel Jones has stellar first drive for Giants and Lions’ Jermaine Kearse breaks leg on the first full night of the NFL preseason.

Jones, the quarterback who was drafted out of Duke at No. 6 overall, was a controversial pick as many felt the Giants reached to get him when they could have also potentially drafted him later in the first round with the No. 17 pick.

After a conservative three-and-out opening drive with starter Eli Manning at the helm, Jones took the field against the Jets for his professional debut. The 22-year-old rookie was precise, completing all five passes for 67 yards, including a 12-yard touchdown strike to wide receiver Bennie Fowler.

Jones’ night was cut short, as severe weather in the area caused a 59-minute delay at MetLife Stadium. The Giants sent out their third-string quarterback Alex Tanney once the game resumed, so Jones ended on a high note with one perfect drive.

The Giants would go on to beat the Jets in the preseason battle of New York, 31-22.

More from Heavy.com on Jones’ Debut

No. 1 Pick Kyler Murray Debuts by Completing 6-of-7 in First Action

Jones wasn’t the only first-round rookie QB under center on Thursday night, as the No. 1 pick in this past April’s NFL Draft, Kyler Murray, took the field for his debut with the Arizona Cardinals.

Like the Giants’ Jones, Murray’s night lasted only one drive, but it was impressive, as he completed 6-of-7 passes for 44 yards against the Los Angeles Chargers.

The 29-year-old was blocking on a running play during the first drive of the game when the injury occurred.

Kearse had played the previous two seasons with the New York Jets, before coming over to the Lions where he was making progress on securing the No. 4 receiver role.

IF YOU BUILD IT, THEY WILL COME: White Sox and Yankees Scheduled to Play at ‘Field of Dreams’ in 2020

The “Field of Dreams” will come to life next year in Iowa as the White Sox and Yankees will play in a temporary 8,000-seat ballpark that will be built on the Dyersville farm site where the famous 1989 baseball movie was filmed.

MLB at Field of Dreams presented by GEICO will take place on Aug. 13, 2020 and will be the first Major League Baseball game held in Iowa. It will be nationally broadcast on FOX at 7 p.m. ET.

“As a sport that is proud of its history linking generations, Major League Baseball is excited to bring a regular-season game to the site of ‘Field of Dreams,’” Commissioner Rob Manfred said on Thursday. “We look forward to celebrating the movie’s enduring message of how baseball brings people together at this special cornfield in Iowa.”

DON’T MISS THESE STORIES: Rounding Up the Top Sports Headlines

WHAT’S ON TAP IN THE SPORTS WORLD

This year’s PGA postseason consists of just three tournaments, with the top 70 players in the standings following THE NORTHERN TRUST advancing to the BMW Championship. The top 30 will then book a trip to East Lake for the TOUR Championship, which will begin on August 22nd.